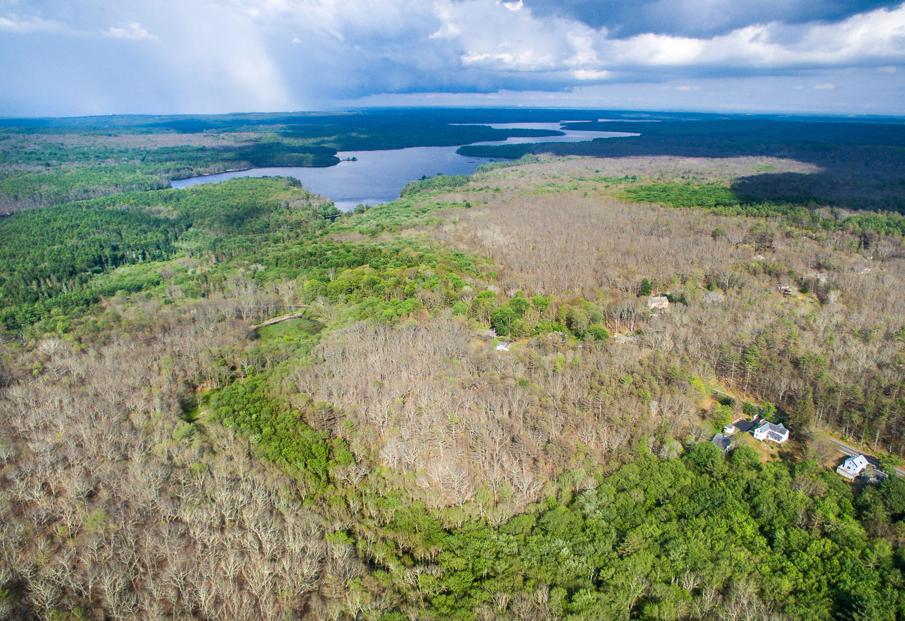 With no natural fungal pathogen to stop them, gypsy moth caterpillars are denuding Massachusetts forests. Gypsy moth caterpillars have stripped many trees bare (above, the scene in Scituate, R.I.), leaving them vulnerable to disease and other pests. (John Tlumacki/Globe StaffAram Boghosian for The Boston Globe)
By Michael Levenson
Globe Staff

BREWSTER — They are hungry, hairy, and covered in warts. They hang from the trees like joke-shop moustaches, drop onto picnic tables and infiltrate tents and open shirt collars. Walk into the woods these days and the sound of raindrops hitting a tarp turns out to be their little black droppings showering the forest floor.

A biblical outbreak of voracious, finger-long gypsy moth caterpillars, the biggest in more than three decades, is devouring trees across Massachusetts this month, stripping bare more than 100,000 acres from the Quabbin Reservoir to Cape Cod and testing the mettle of even the most intrepid camper.

“It’s just a gypsy moth bloodbath out here,’’ said Jeff Kilburn, as he patrolled his family’s campsite in Nickerson State Park, where hundreds of the bristly menaces were merrily chewing through the oak, cherry, and pines overhead — leaving swaths of trees leafless.

He was wearing a safari hat for protection from the droppings and had stretched a blue plastic sheet over his picnic table to shield his coffee and cereal.

“It’s like all-out war,’’ Kilburn said, as he warily eyed the wooly barbarians crawling around him. “They have invaded and they are taking no prisoners.’’

Massachusetts is in the midst of the worst plague of gypsy moth caterpillars since 1981, said Joseph Elkinton, an entomologist at the University of Massachusetts Amherst. That year, widely regarded as the annus horribilis for the red-and-brown larvae, the insatiable beasts used their powerful jaws to cut a swath of destruction across more than 200,000 acres of Massachusetts hardwood and millions more nationwide.

Entomologists believed the caterpillar outbreaks — which had hit the state every decade or so since the 1860s, when the moths were first brought to the United States from France — were a thing of the past.

But a severe drought last May and drier-than-normal conditions earlier this month prevented the spread of the fungal pathogen, which thrives in wet weather. Suddenly, the caterpillars were back with a vengeance, denuding forests across much of the state and parts of Connecticut and Rhode Island.

“It’s everywhere,’’ Elkinton said. “You can hear the frass falling,’’ he added, using the scientific term for caterpillar droppings. “And you can hear the chewing; it’s quite a dramatic phenomenon.’’

Ken Gooch, director of the forest health program at the state Department of Conservation and Recreation, said the caterpillars pose a serious threat to forests because they completely strip trees, making them vulnerable to other pests and disease. Last year, he said, the state spent $110,000 to remove 870 oaks from Nickerson State Park that had been killed by a two-pronged assault by gypsy moth larvae and cynipid Gall wasps.

“So this will be the second really bad year,’’ Gooch said, as he surveyed hundreds of the caterpillars mercilessly feasting on the leaves of a black oak in the park. “A healthy tree can tolerate multiple stressors, but when you get repeated defoliation,’’ trees die.

The caterpillars have also caused some mild panic in rural communities. Gooch said he recently got a call from an elderly woman in Sturbridge whose house was covered in caterpillar droppings.

“She called me up, and she was crying,’’ Gooch said. “She said, ‘I’m slipping as soon I go out my door. I could break a leg.’’’ He told her to hose off the front walkway and sidewalk.

He said a distraught teacher in Southeastern Massachusetts also called him after several children in her class got rashes from touching the spiny hairs of the caterpillars, which had fallen from trees into the playground.

He said the teacher wanted to know why the state hadn’t done anything to control the caterpillar population. But Gooch said there is little the state can do.

Aerial spraying, he said, is costly and raises ecological concerns because it can kill other kinds of moths and butterflies, not just the dreaded gypsy caterpillar. Elkinton agreed, saying it was not “environmentally desirable’’ to use pesticides to battle caterpillars on a regional scale, as was customary in past decades.

“There is really not much that can be done, not now,’’ Elkinton said. “We don’t have any magic bullets.’’

Fortunately, he said, the caterpillars’ rapacious feeding season is almost over. In the coming weeks, the larvae will metamorphosize into hard-shelled pupae and then transform again into mottled brown moths, best known for alighting on screen doors and futilely attacking porch lights.

In the meantime, campers and outdoor enthusiasts must simply tolerate the creatures.

John Kerr, who was camping at Nickerson with his girlfriend, Mary Lafond, said he sees the caterpillars everywhere and their droppings are “the only sound you hear’’ at night.

“They’re rough this year,’’ Kerr said as he shared sandwiches with Lafond at a picnic table by their pop-up camper. Still, he said with a shrug, “It’s not going to ruin my trip. A couple of moths ain’t gonna bother me.’’

PREVIOUS ARTICLE
Article 3 of 125
NEXT ARTICLE