Families deem ‘no visits’ edict essential, painful
With facilities enforcing a strict ‘no visits’ policy, family members are scrambling to find ways to stay in touch with loved ones. 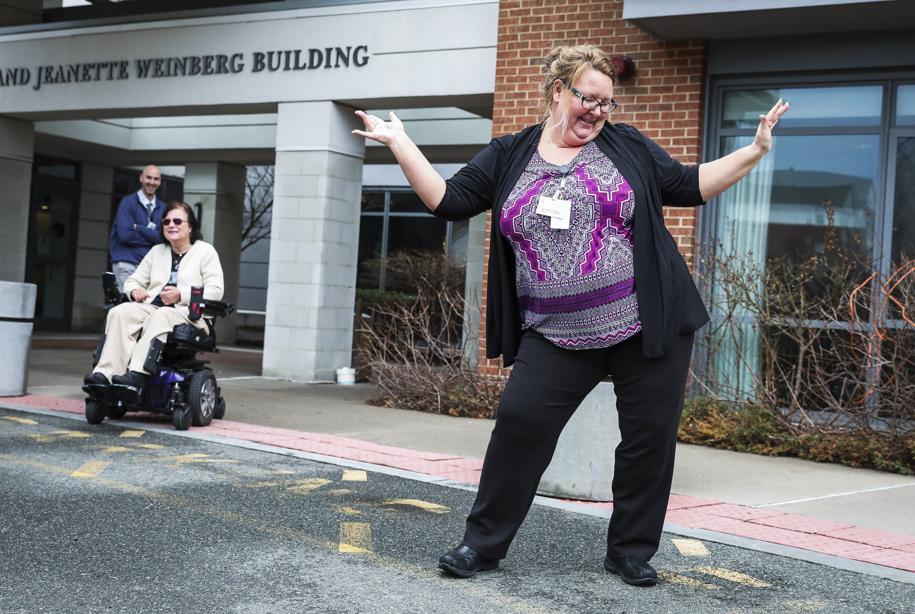 Director of nurses Lea Poulin danced outside of The Leonard Florence Center with residents last week when the Chelsea living facility invited a three-piece band to perform outside so residents could listen, from a safe distance.
PREVIOUS IMAGE

They know it’s necessary. They trust the caregivers to keep their loved ones safe.

But for families of residents at Boston-area senior living communities, all of which have barred visitors for more than a week now to keep the coronavirus at bay, the separation feels cruel and painful.

“It’s extremely hard not to see her," said Robin Bromberg, of Wakefield, whose 81-year-old mother Charlotte lives at the Leonard Florence Center, a skilled nursing facility in Chelsea. “None of this is OK. But when you hear this [virus] affects people 80 and up the most, I know it’s necessary.’’

Nursing homes and assisted-living facilities have embraced federal and state health guidance that keeps adult sons and daughters, grandchildren, and friends outside closed doors for the foreseeable future to protect a population deemed at highest risk for COVID-19, the potentially deadly respiratory ailment caused by the coronavirus. Some make exceptions for end-of-life situations, but even then they screen visitors to ensure they’re exhibiting no signs of illness and require them to wear protective gear.

About a quarter of the deaths stemming from the virus nationally have been at senior care facilities. The danger hit home last week when two residents of The Branches of North Attleborough, an assisted-living and memory-care residence, tested positive, as did a resident of Cape Cod Senior Residences in Bourne.

While many families have stepped up phone calls and e-mails to their loved ones, the restrictions have disrupted routines and robbed them of the cherished face-to-face contact that becomes more important as the parents age. It’s been hardest for those whose relatives can’t communicate through other channels because of physical or cognitive disabilities.

Sudbury resident Dianne Baxter hasn’t had contact with her 86-year-old mother, Jean Gaudet, who has dementia, for more than a week since her residence, Stone Rehabilitation & Senior Living in Newton Upper Falls, shut its doors. Her mother can’t take calls, and probably doesn’t know why her children can’t visit.

“We haven’t been able to see her or talk to her at all,’’ Baxter said. “She relies on body language and physical cues to communicate emotion. . . . We’re racking our brains to find a way we can at least see she’s OK."

Residents themselves try to keep up morale and boost the spirits of friends and families in person or remotely.

“I’m grateful for my family and the things I have,’’ said Lillian Biedermann, 85, who lives with her 87-year-old husband, John and their dog in the Residence at Five Corners, an Easton assisted-living center. “I’m not feeling bitter.’’

At the same time, Biedermann recognizes that it might be a while before she can resume regular visits with her daughter and son, who’s in the National Guard. And while she can still go outside, she wishes she could sit closer than 6 feet from fellow residents on the outdoor chairs.

Most long-term care facilities have also shut their dining rooms and instead are asking staffers to bring all meals directly to residents’ rooms or apartments. But until last weekend, some senior living communities were allowing residents to meet family and friends outside the facilities.

“It’s an anxious time for the children of all parents in senior-living facilities,’’ said Mark Leccese of Brookline, who said his socially active mother, Janet, now has to eat her meals alone in her room and talk to her friends at Cabot Park Village in Newtonville on the phone. Last weekend, he was able to meet his mother at the door and take her for a drive.

“It was a nice opportunity for my mom to get out for the afternoon,’’ Leccese said, recalling that he drove her down Storrow Drive along the Charles River and by the Chestnut Hill Reservoir so she could see the water. But it’s not clear whether they’ll continue to be able to do that, as the guidance for social distancing becomes more stringent.

The new reality is forcing all parties to be more diligent about keeping in touch, and more creative about how to do it. Staffers at some long-term care facilities are bringing tablet computers to the rooms of technology-averse residents and helping them FaceTime with concerned relatives.

“It’s new to a lot of the residents because their generation hasn’t done it before,’’ said Betsy Mullen, chief operating officer of Chelsea Jewish Lifecare, which operates Leonard Florence Center. “But it keeps them connected to their families.’’

On Friday afternoon, Leonard Florence residents were treated to a concert by “All Good Things,’’ a musical group led by recreational programming director Jimmy Honohan. Residents sitting on balconies or watching from their windows were serenaded with a medley of oldies, from “Mustang Sally’’ to “This Magic Moment’’ on guitar, drums, and saxophone.

Such events are comforting not only to the residents but to children and relatives, who can’t attend but know that the residents are being entertained and looked after.

“We just have to take it week by week,’’ said Norman Frisch, who lives in the Pioneer Valley town of Easthampton and visits his mother Bernice, 89, at Leonard Florence on the weekends. “We just have no idea how long this will go on. My brother and I check in on her [by phone] a couple of times a day and she seems to keep herself occupied.’’

Some adult children have to explain the global health crisis to parents who pay little attention to the news.

Swampscott resident Barbara Klaman said she feared her mother, 95-year-old Edythe Lehman, who lives at the Brooksby Village Senior Living Community in Peabody and has been in poor health since she fell and broke her hip, was wondering why her children weren’t coming by.

“I just spoke to her and told her what’s going on,’’ Klaman said. “It’s important for her to know that she’s not forgotten."

For the time being, many senior living residents are turning — sometimes by phone — to their fellow residents for solace. Esta Lupo-Stern , 85, and Wynne Miller, 84, friends at Cabot Park Village, are coming to terms with the new restrictions while working to cheer one another up.

“There’s very little strolling around and meeting people in the lobby,’’ Lupo-Stern said. “This is serious. We’re in it for a very long haul so it’s important for us to keep in touch."

But keeping in touch with family members adjusting to their own changes can be tricky. Miller said she was talking to her son and daughter-in-law who were working from home while trying to monitor their kids’ cloud-based schoolwork.

“They had to hang up because it was ‘cloud recess,’’’ she said.