Bow to the scintillating queens of ART’s ‘Six’ 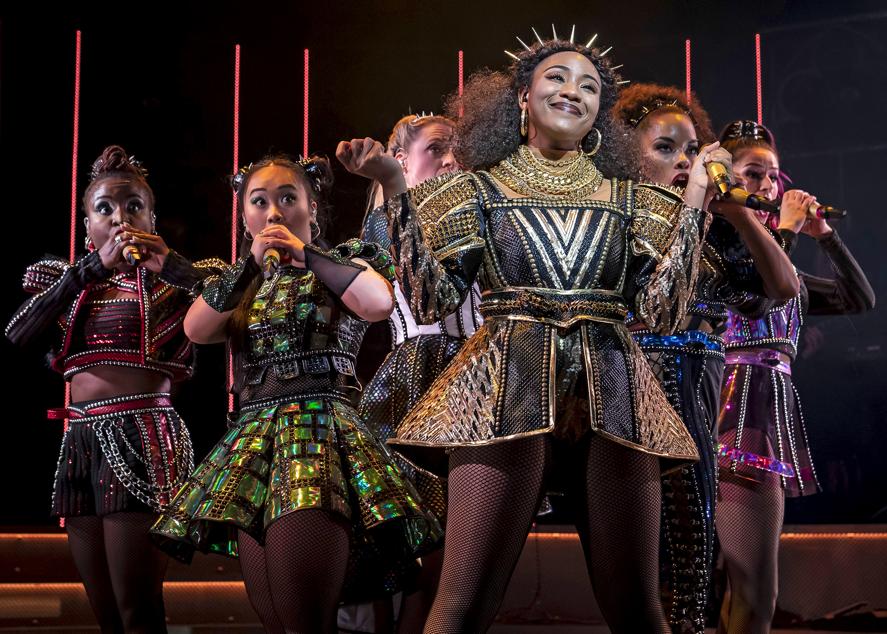 By Toby Marlow and Lucy Moss. Directed by Moss and Jamie Armitage. Choreography by Carrie-Anne Ingrouille. Presented by the American Repertory Theater.

CAMBRIDGE — From the moment the stars of “Six’’ make their dramatic entrance onstage at the Loeb Drama Center, through their triumphant encore, these women barely pause for breath. After all, they’ve got a lot to say.

In a pre-Broadway run at the American Repertory Theater, “Six’’ delivers an exhilarating evening of high-octane talent, inspiring anthems, and, oh, by the way, a view of history from primary players who refuse to be reduced to footnotes.

Over the next 80 minutes — it feels like eight — each of Henry VIII’s queens steps up to center stage with her microphone to sing a song about her life. The idea is that this “live tour of herstory’’ will culminate with the crowning of the one who endured the most hardships. When the lineup includes wives who were “divorced, beheaded, died, divorced, beheaded, survived,’’ the competition is fierce. And when the staging keeps the queens dancing, reacting, and performing backup singer duties for each other, the energy never wanes, let alone those harmonies.

To help flesh out the story, creators Toby Marlow and Lucy Moss weave some catty comments and hilariously anachronistic references into their delicious lyrics and between-song dialogue. A riff from “Greensleeves’’ appears as effortlessly as a nod to the Spice Girls and nursery rhymes. The techno-pop “Haus of Holbein’’ references Henry’s Tinder-style swipe-left-or-right approach to dating — the king did choose wife No. 4 based on a portrait painted by Hans Holbein — packing a complicated bit of history into a brilliant visual moment.

What Marlow and Moss’s clever frame makes possible is a revealing look at human beings separate from the king they married. Catherine of Aragon’s stubborn determination is on display in “No Way’’; Anne Boleyn’s fun-loving spirit comes through in “Don’t Lose Ur Head’’; Jane Seymour explains her steadfast love in “Heart of Stone’’; Anna of Cleves relishes her role despite her husband’s disappointment with her looks in “Get Down’’; Katherine Howard reveals how early abuse and her desire to be loved led to her demise in “All You Wanna Do’’; and Catherine Parr explains what she sacrificed when the king chose her — and what she accomplished without him (she published books and supported girls’ education) — in “I Don’t Need Your Love.’’

The wives’s songs are inspired by pop divas that include Beyoncé, Ariana Grande, and Rihanna, among others (the program even notes the individual “queenspirations’’), but those stars have nothing on the six women performing on the ART stage. Adrianna Hicks (Catherine of Aragon), Andrea Macasaet (Anne Boleyn), Abby Mueller (Jane Seymour), Brittney Mack (Anne of Cleves), Courtney Mack (Katherine Howard), and Anna Uzele (Catherine Parr) bring their own spectacular vocals and stunning stage presence to the show. They hit high C’s and low notes without missing a beat of Carrie-Anne Ingrouille’s athletic choreography. (How do they keep breathing while singing and making all those moves?)

Although “Six’’ plays as a concert with a story line to connect the songs, each actress delineates her character with distinctive personality quirks, making them all stand out beyond the song that provides some context for their lives. To help shape those distinct characters, costume designer Gabriella Slade has created eye-popping combinations of corsets and bustiers, Spandex pants and poufy sleeves for one, a clear plastic miniskirt and bra for another.

“Six’’ stands out as an inspiring window into a handful of unique individuals dismissed by history. With toe-tapping songs and some unforgettable anthems, this musical is a reminder of the power of each individual voice.

By Toby Marlow and Lucy Moss. Directed by Moss and Jamie Armitage. Choreography by Carrie-Anne Ingrouille. Presented by the American Repertory Theater. At the Loeb Drama Center, Cambridge, through Sept. 29. Tickets from $25, 617-547-8300, www.americanrepertorytheater.org