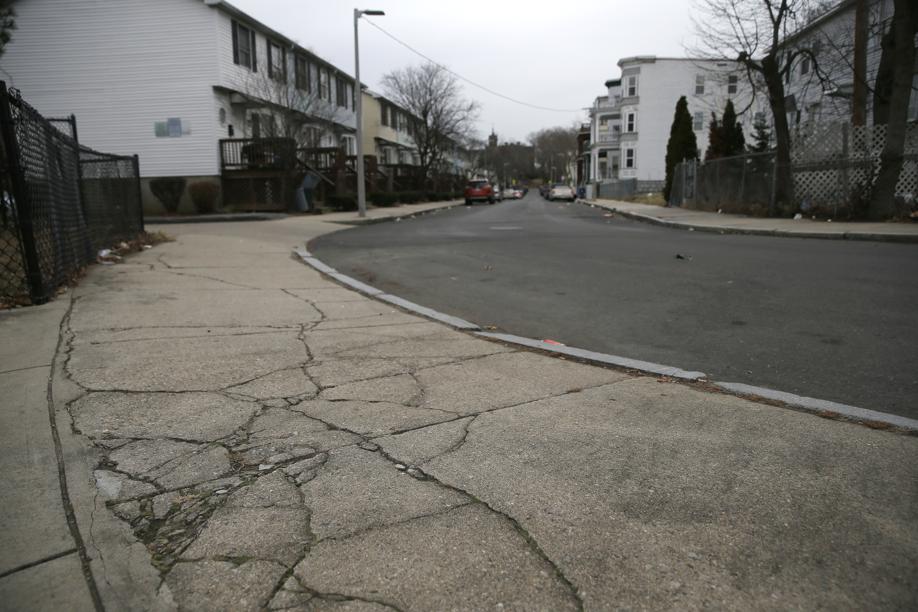 The sidewalk outside of the entrance to the playground behind the Trotter School in Dorchester is a spiderweb of cracks.
PREVIOUS IMAGE

The divide between the haves and have-nots in Boston has always been stark, often measured by the quality of schools and the safety of streets.

But a new city analysis underscores a basic disparity that is often overlooked, though it’s in plain sight: Residents in the city’s poorest neighborhoods — Roxbury, Mattapan, and parts of Dorchester — are much more likely to contend with buckled asphalt, cracking concrete, and tree roots smashing through their sidewalks.

“It’s been like this ever since I moved here [three years ago],’’ Frank Pina said, as he looked down at the spiderweb cracks in the sidewalk outside his home near Warren Street in Grove Hall. He said he has not called the city for repairs because “nothing would get done.’’

Indeed, sidewalks are part of the city’s legacy of neglect in low-income neighborhoods. In Grove Hall, which straddles Roxbury and Dorchester, residents are also beset by large potholes and litter piling up in a field next to a deteriorating post office. Residents who call City Hall for repairs soon grow weary of the slow grind of bureaucracy, so they endure, advocates said.

“They think the city isn’t going to do anything about it,’’ said Ed Gaskin, who runs the Greater Grove Hall Main Streets program, an advocacy group tasked with getting basic neighborhood amenities — such as crosswalks, sidewalks, and street lights — installed or fixed.

As a result, recent data show, sidewalks in some of the city’s low-income neighborhoods are often among the most damaged.

Residents said they have good reasons to be skeptical of the city’s commitment to basic neighborhood improvements. For example, Robert Hector, a retired engineer who has lived in Grove Hall for nearly 30 years, said he made about a half-dozen calls to the city to replace a “Welcome to Grove Hall’’ sign that was knocked down by a car about a decade ago. After much pushing, it was replaced about three years ago, he said.

But the city may finally be taking notice. Following a 1,600-mile sidewalk review last year, Chris Osgood, the city’s chief of the streets, transportation, and sanitation, said Boston will be taking on sidewalk equity with a systematic approach to repairs and investing $2 million in this spring’s capital budget to reconstruct sidewalks on various streets crossing Humboldt Avenue, which stretches from Franklin Park to near Dudley Square.

“One of the things that we . . . identified is that the underlying condition of the sidewalks was actually quite different across the neighborhoods,’’ Osgood said.

Boston is also a finalist for a $1 million grant from Bloomberg Philanthropies to support the city’s plans to “infuse equity’’ in its allocation of resources for sidewalk and street maintenance. The goal is to augment 311 dispatch requests with data on community need, pavement condition, and usage, officials said.

The city began taking a closer look at sidewalk equity last year after the issue was raised in a 154-page report from Mayor Martin J. Walsh’s Office of Resilience and Racial Equity. The document urged the city to rethink how it repairs and maintains sidewalks and develop a proactive, systematic approach in allocating resources.

Typically, city crews are dispatched to do spot repairs based in part on residents’ complaints to the city — either through its 311 hot line or neighborhood services — fixing the problems as they arise.

But city officials said in targeting sidewalk equity, they did not use 311 calls because some neighborhoods use the hot line roughly twice as often as others do. Officials said relying on such data would give a false notion of which neighborhoods or streets need work.

Instead, a city crew went block by block last year to assess Boston’s 1,600 miles of sidewalks. The crew analyzed blocks needing sidewalk repair, the shape they were in, and whether they were compliant with the Americans for Disability Act, said Katie Choe, the city’s chief engineer and director of construction management.

The crew assessed the condition of each sidewalk by the total surface area damaged, rather than the severity of damage, and then mapped out the poorest sidewalk conditions in the most disadvantaged areas.

“Those were the areas where we need to put some special investments into,’’ Choe said.

“It’s important that the city uses an equity lens’’ on these issues, said City Councilor Kim Janey, who represents Roxbury. “Residents don’t always know who to call. And the city can’t always respond to the squeaky wheel.’’

Jamie Mitchell, a barber who owns Mattapan’s Finest barbershop, said the sidewalks equity project is long overdue. He noted that the city repaired the sidewalks outside his Blue Hill Avenue store last year but said there are plenty of other stretches that need maintenance.

The sidewalks, he noted, are a fraction of the issues plaguing Grove Hall, where he lives. For example, he and other business owners have been trying to get security cameras installed to monitor loitering and what they say are illegal activities at a municipal lot behind their businesses. They have held meetings with city officials, but talks have dragged on, he said. And there are still no cameras.

“They are not giving Roxbury . . . as much [improvements] as they are giving other neighborhoods,’’ Mitchell said.

Gaskin said that when he started advocating in the neighborhood, he and residents had to push the city to get 13 street lights replaced, a new crosswalk near a busy school, banners, and new sidewalks. On one occasion, Gaskin said, he took some city officials on a walk through the neighborhood, and one of them noticed a tree root bursting through and fracturing the sidewalk.

He said the mayor kept his promise to give Grove Hall renewed attention: There are new sidewalks along Grove Hall center and the Warren Street and Elm Hill neighborhoods. The sidewalks on Warren Street and Blue Hill Avenue are now compliant with the Americans with Disability Act. And Grove Hall is no longer in the dark, with new street lights. There is a new crosswalk near a busy school and bike racks and fences, he said.

But for other things, the neighborhood is still waiting.

“The sidewalk near the post office [on Warren] is all asphalt,’’ Gaskin said. “I’ve been asking to get it fixed. I’m still waiting for it to get done.’’