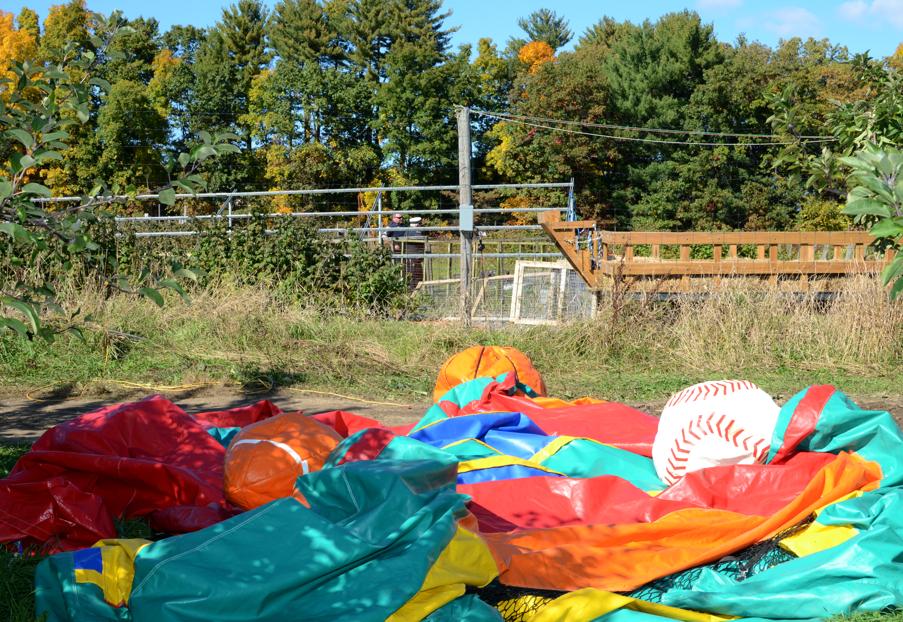 A police photo of the area where the bounce house landed at Sullivan Farm. Two children were injured in the accident.
PREVIOUS IMAGE

It was a brisk fall day in Nashua — tailor-made for apple-picking and scarecrow-making at the Halloween festival at Sullivan Farm.

When a hayride dropped off Danielle Rogers and her family near a colorful bounce house, her 3-year-old son, Joseph, and the 2-year-old son of a family friend climbed inside. Then came a gust of wind and, as Rogers screamed, the inflatable house lifted off the ground. She grabbed the rope attached to the corner, but the wind yanked it from her hands. The bounce house, and the boys, went sailing high into the October sky, like a giant balloon — and when it landed, the two boys were severely injured.

Inflatable attractions like bounce houses, obstacle courses, and slides, which have increased in popularity in recent decades, may seem less ominous than roller coasters that flip riders upside down or carnival rides that send thrill-seekers whirling through the open air. But they can be just as dangerous, and in many states they are far less regulated.

The estimated number of injuries on the attractions soared from 5,311 in 2003 to 17,377 in 2013, according to a Consumer Product Safety Commission report analyzing US hospital records. A Stateline analysis found that the trend continues, with an estimated 20,700 injuries last year.

Only half of US states — including New Hampshire and Massachusetts — have regulations governing permits, inspections, and insurance. But even where rules are in place, a Stateline investigation found major shortcomings.

In several states that require all inflatables to be permitted, dozens of companies advertise inflatable rentals online, but do not have permits on file with the state. That means the state has no way of knowing whether they have been properly inspected or are insured.

Few states scout for events where inflatables will be set up, or search online for company listings. When they find illegal operators, states rarely issue fines or fees. And in a few states, the regulating agencies don’t have the authority to punish operators even if they wanted to.

In addition, state laws about amusement rides are often unclear, leaving operators unsure about whether inflatables are regulated and what the penalties are for those who don’t follow the rules.

It’s unclear how actively Massachusetts enforces its law requiring companies that own inflatables to have them permitted, inspected, and insured. A spokeswoman at the Massachusetts Division of Professional Licensure, which regulates amusement rides and inflatables, declined to provide information about whether the state actively searches for unlicensed operators, and whether the state issues violation letters or fines to companies that break the rules.

In many of the states that regulate inflatables, officials say that they try the best they can. But some admit it’s hard to manage.

“It’s difficult sometimes because [operators] come and go quickly,’’ said Denise Oxley, general counsel of the Department of Labor in Arkansas. “Unless they set up at a local fair or event, or they open a little play place for kids, it’s hard to catch.’’

In New Hampshire, a state investigation found that the Nashua bounce house wasn’t staked down when the boys climbed in it that day in 2014. What happened next, when the wind came up, is detailed in a legal complaint filed by the parents of one of the boys. The house sailed over a fence, higher than a nearby barn. It was about 50 feet in the air when, with the boys still inside, it flipped over and shot to the ground “like a lawn dart,’’ the complaint said.

Gary Bergeron, the owner of Rickety Ranch, an animal sanctuary on Sullivan Farm, had bought the bounce house just days before from a man living down the road, according to Nashua Police Department records. It cost him $1,500 and was at least 12 years old.

Bergeron, at the time a licensed amusement ride inspector for the state, told police that he inspected the bounce house and found several problems, including missing stakes. So he said he moved it to a fenced-off part of the farm, and put two haystacks in front of it to block it off. He blew it up to let it dry, he said, not because he intended it to be used.

But witnesses, including farm visitors and volunteers, later told police that the bounce house wasn’t behind a fence and wasn’t blocked off. And, police found, the bounce house had been advertised as a feature of the event: An ad on a local website invited the whole family to “jump in the jumpy house.’’

Bergeron, who organized the festival as a fund-raiser for Rickety Ranch, declined to comment. He denies any fault or wrongdoing, according to civil court records. He was also criminally charged in June 2015 with failing to register the inflatable and not having it properly inspected. Bergeron pleaded no contest and was found guilty.

Like New Hampshire, about half the states that regulate inflatables require them to be registered and inspected before being used at a public event. Other states, such as Massachusetts, regulate inflatables no matter where they are set up, including when they are rented out to private birthday parties and company events. In Massachusetts, the rules do not apply to inflatables that are privately owned and not rented out to others.

No matter the laws, some business owners find ways around them. They cross state lines for a weekend fair without getting a permit, or change their business name or phone number to avoid detection, according to state officials.

In states that attempt to regulate all inflatables, it can be hard for regulators to keep up. An online search in some of those states found dozens of operators without permits: 24 in Arkansas, 30 in New Mexico, 36 in Tennessee, and 90 in Texas.

In New Hampshire, Briggs Lockwood, chief of tramway and amusement ride safety, says there are likely to be businesses the state doesn’t know about, but that he “would have no idea really how big the problem is.’’

In fact, to assess the problem, many states have relied on help from competitors — inflatable operators dropping a dime on those operating without permits.

This can lead to a cat-and-mouse game. Operators wait until the state inspector leaves before setting up, then another operator calls the inspector and tells him to come back, said Rob Gavel, the program manager for Maryland’s safety inspection unit.

In Nashua, Rogers and the other parents rushed to recover their children from the mangled mound of vinyl on the ground.

Rogers’s son, Joseph Suomala, had several broken bones. Aayden Vogel, the younger boy, was far worse off. He was unconscious and not breathing, with signs of a traumatic brain injury.

Joseph was taken by ambulance to St. Joseph Hospital in Nashua; Aayden by helicopter to Tufts Medical Center in Boston.

Both boys survived, but since 2000, at least four people died in US accidents related to inflatables, according to Patty Davis, a Consumer Product Safety Commission spokeswoman. During the same time period, she said, at least 18 people have died on other types of amusement rides and attractions.

“Participatory’’ attractions — such as inflatables, go-carts, and trampoline parks, in which people have greater control over their own movement — have significantly higher injury rates than other amusement attractions, said Kathy Fackler, president of the nonprofit Saferparks, which tracks amusement ride injuries and advocates for tougher safety standards.

“Some of that you can mitigate as a parent or participant,’’ Fackler said. “But maybe not all of it.’’

The number of injuries started to soar after 2008, according to the CPSC and an analysis of its data by the Child Injury Prevention Alliance.

The trend can be explained in part by the 2008-2009 recession, said Larry Cossio, who owns a national insurance agency that specializes in inflatables. As people lost their jobs, they looked for an easy way to make money, he said. Inflatables can be purchased online for as little as $1,000.

All those people entering the industry without training or experience made injuries much more likely, Cossio said.

Flyaway accidents like the one in New Hampshire remain rare. But they often receive a lot of attention and give the industry a black eye, said Kevin Baldree, owner of Austin Moonwalks, a permitted inflatables business in Texas.

Other types of accidents are much more common, such as when children play rough and injure themselves or fall off the devices onto a hard surface, according to a Stateline review of injuries reported to states and of the CPSC’s injury database. The most common injuries include sprained ankles, broken arms and legs, concussions, and strained or sprained necks.

There is no way of knowing exactly how many injuries happen in each state, because the CPSC database does not break down the incidents by geography. In Massachusetts, only a few injuries related to inflatables have been reported to the state in the last five years, according to state Division of Professional Licensure records.

In 2015, for example, someone fell while playing on an inflatable obstacle course at the Sturbridge Host Hotel. The state redacted information about the severity of the injury. But a letter included in the records says there were only two attendants watching people play on five inflatables. “This is distressing!!!’’ the letter says.

Supervision can do a lot to prevent these injuries, Baldree said, but parents often don’t watch their children. “They call that the ‘inflatable baby-sitter syndrome,’ ’’ he said.

The cost of doing business

Many permitted inflatable operators, such as Derek Nelson, branch manager of Space Walk of Southeastern Massachusetts, say they support state regulations. It helps reduce the number of uninsured companies that often give others a bad name, Nelson said.

“Those fly-by-night businesses are hurting . . . the whole industry,’’ he said.

But operators and insurance agents say the laws as they are now enforced don’t protect children from injury.

Instead, operators say, they create an uneven playing field by increasing costs for operators who follow the rules. States often charge permit or inspection fees, ranging from $10 to $280 a year. And insurance can cost another $1,500 or more a year for each attraction, Cossio said.

State officials say small businesses sometimes choose to shut down once they find out about the costs. For larger businesses, more likely to follow the rules, the costs add up.

Operators say states should focus on training. Pennsylvania, for instance, allows operators to inspect their own devices if they pass a test and get a permit.

“If that’s their business, that’s their livelihood,’’ said Walt Remmert, the state’s director of the bureau of ride and measurement standards. “They have every reason to comply.’’

A charge of negligence

Aayden had to stay in the hospital for a month, relearning how to walk and talk, according to his parents’ court complaint. It also said that his severe brain injury left him with physical and mental disabilities, and his eyesight is likely to be permanently damaged.

Aayden’s parents, Kattrina Morales and Robert Vogel, along with Rogers and Joseph’s father, Bryan Suomala, are suing the farm and the sanctuary, as well as Bergeron, his wife, and stepson, and Katherine Williams, owner of the farm.

The boys’ parents and their lawyers declined to comment.

In the lawsuit, Aayden’s parents contend that Bergeron and the other parties were negligent in allowing an unsupervised, unsecured, defective, unstaked bounce house to be played in, and that their negligence resulted in Aayden’s injuries, as well as his “loss of enjoyment of life, and tremendous and ongoing medical and occupational costs.’’

Bergeron, his family, and the ranch deny these charges, and Williams and Sullivan Farm deny all involvement with the accident.

A jury trial is scheduled for January.