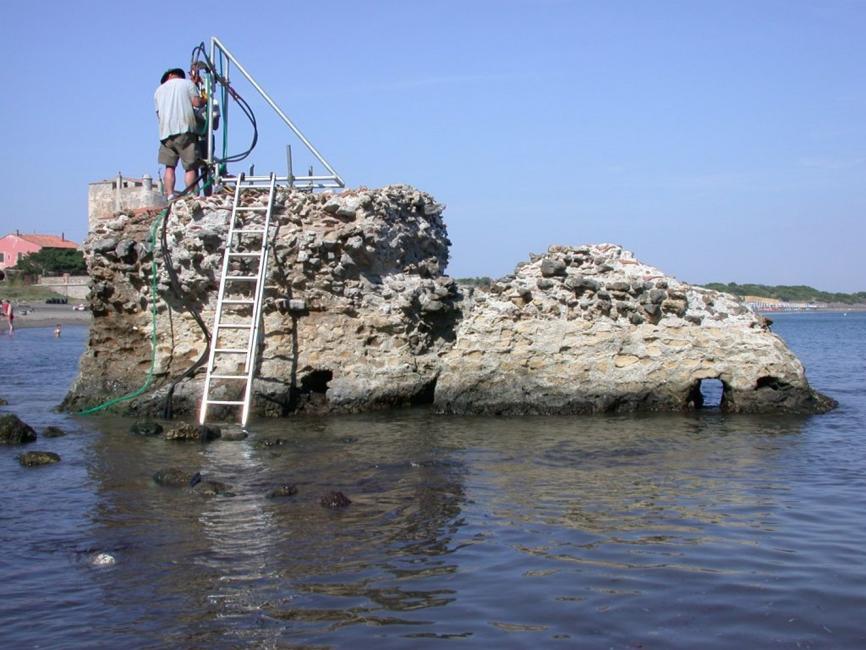 Drilling at an ancient marine structure in Portus Cosanus, Tuscany, in 2003.
PREVIOUS IMAGE

A bunch of half-sunken structures off the Italian coast might sound less impressive than a gladiatorial colosseum. But underwater, the marvel is in the material. The harbor concrete, a mixture of volcanic ash and quicklime, has withstood the sea for two millennia and counting. What’s more, it is stronger than when it was first mixed.

The Roman stuff is ‘‘an extraordinarily rich material in terms of scientific possibility,’’ said Philip Brune, a research scientist at DuPont Pioneer who has studied the engineering properties of Roman monuments. ‘‘It’s the most durable building material in human history, and I say that as an engineer not prone to hyperbole.’’

By contrast, modern concrete exposed to saltwater corrodes within decades.

The mystery has been why the ancient material endured. ‘‘Archaeologists will say they have the recipe,’’ said Marie Jackson, an expert in ancient Roman concrete at the University of Utah. (Pliny the Elder once wrote an ode to concrete ‘‘that as soon as it comes into contact with the waves of the sea and is submerged becomes a single stone mass, impregnable to the waves.’’) But it’s not the complete picture: It’s one thing to assemble the ingredients, another to know how to bake the cake.

To that end, Jackson and her colleagues peered into the microscopic structures of concrete samples, extracted from the sea walls and piers as part of a project called the Roman Maritime Concrete Study. ‘‘This rocklike concrete is behaving, in many ways, like volcanic deposits in submarine environments,’’ Jackson said.

Where modern concrete is designed to ignore the environment, Roman concrete embraces it. As the scientists report in a study published Monday in the journal American Mineralogist, Roman concrete is filled with tiny growing crystals. The crystals, like tiny armor plates, may keep the concrete from fracturing.

The scientists subjected the concrete samples to a battery of advanced imaging techniques and spectroscopic tests. The tests revealed a rare chemical reaction, with aluminous tobermorite crystals growing out of another mineral called phillipsite. Brune, who was not involved with the study, called the work a ‘‘significant accomplishment.’’ He likened it to the scientists biting into a cake of mysterious flavor and determining that the baker used organically sourced dark chocolate.

In this instance, the key ingredient proved to be sea water. As sea water percolated within the tiny cracks in the Roman concrete, Jackson said, it reacted with the phillipsite naturally found in the volcanic rock and created the tobermorite crystals.

‘‘Aluminous tobermorite is very difficult to produce,’’ she said, and requires very high temperatures to synthesize small amounts. Cribbing from the ancient Romans might lead to better production of tobermorite, which is prized for its industrial applications, she noted.

The Romans mined a specific type of volcanic ash from a quarry in Italy. Jackson is attempting to recreate this durable concrete using San Francisco sea water and more abundant volcanic rocks. She has several samples sitting in ovens and jars in her lab, which she will test for evidence of similar chemical reactions.

If her effort is successful, the concrete could yet have a role to play in human history — ‘‘if one was indeed interested in making sea walls’’ and ‘‘forced to protect shoreline environments,’’ Jackson said. (In one 2014 study, a team of European climate scientists predicted that, if the next 90 years follow the trend of the past 30, the cost of constructing barriers to hold back the sea might rise to as high as $71 billion per year. The alternative, coastal flooding, could do trillions of dollars in damage annually.)

Modern sea walls require steel reinforcements; a future in which ‘‘large relic walls of twisted steel’’ dot the coast would be ‘‘very troubling,’’ Jackson said. The Romans didn’t use steel. Their reactive concrete was strong enough on its own.