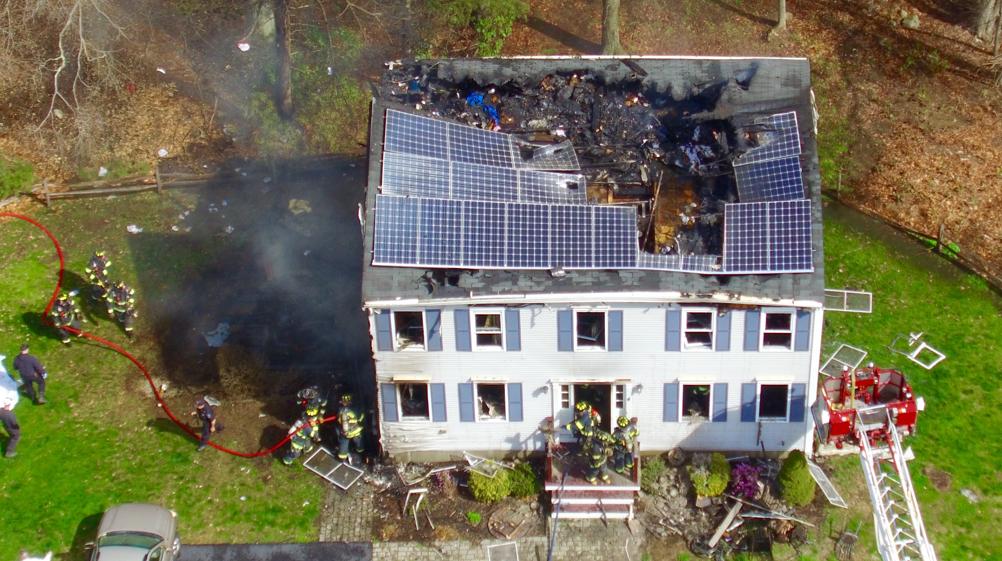 The fire chief said the solar panels on the roof were an obstacle for firefighters.
PREVIOUS IMAGE

The fire started about 9:05 a.m. under a first-floor deck at 4 Beaver Village Way. It quickly moved from the mower to the deck and went on to destroy the rest of the two-story house, East Bridgewater Fire Chief Timothy Harhen said.

“It took possession of the house rather quickly,’’ said Harhen, among the first to arrive on scene.

Don Wood said he was at home when he heard an explosion. He made his way as fast as he could to Beaver Village Way.

“From Plain Street, all you saw was black smoke straight up in the air,’’ Wood said.

He said by the time he arrived, firefighters were attempting to battle the fire.

Wood, a former firefighter, would talk to Pellegrino while walking his dog. The two men didn’t know each other well, but they had conversations about dogs, the neighborhood, and the weather, he said.

He was shocked and saddened by the sudden loss.

“It was such a freak accident,’’ Wood said.

The East Bridgewater fire chief pulled his crew from inside the burning house when the solar panel-laden roof threatened to cave in.

“Nobody was left in the house at that point, so it wasn’t worth the risk,’’ Harhen said.

The solar panels, which covered the front side of the roof, added an obstacle for firefighters, he said.

“It makes it difficult because there is not a way to vent the building,’’ Harhen said.

New solar panel regulations require that three feet along each side of the roof be left open to allow for ventilation in the event of a fire. The solar panels on 4 Beaver Village Way were installed before the new regulations, Harhen said.

While the fire was burning, the sun was also shining, causing the panels to generate electricity that firefighters could not shut off, Harhen said.

Not long after the flames spread into the attic, the roof gave way, Harhen said.

Monday afternoon, Pellegrino’s relatives held each other outside the gutted house. Workers boarded up the windows with wood. The roof caved in and looked black under solar panels. One woman, who didn’t want to give her name but said she lived nearby, walked over to the house just to say a quick prayer for the victim. She didn’t know him. She just wanted to pay her respects.