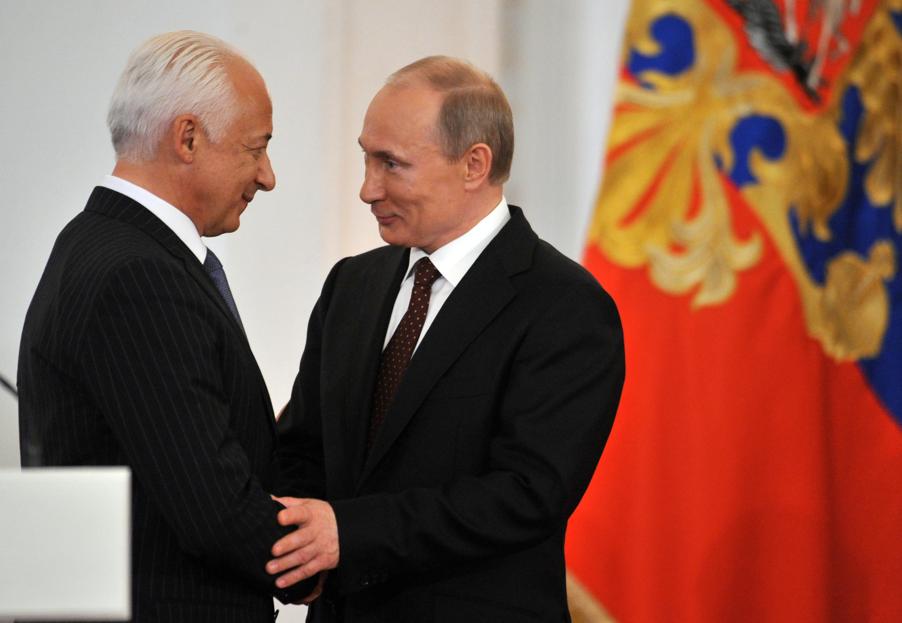 When concertgoers arrive at Emerson College’s Cutler Majestic Theatre on Friday for a performance by Russian musicians, they will be greeted by what’s become a familiar sight at such events: Pro-Ukrainian activists protesting two of the featured performers’ political support for Russian President Vladimir Putin.

The controversy stems from a letter that more than 500 leading Russian cultural figures signed in 2014 supporting Moscow’s policies toward Ukraine, which led to the annexation of Crimea. But with Russian meddling in the 2016 presidential election and an investigation into possible collusion by the Trump campaign now dominating the news, such protests against the Russian regime have taken on new resonance.

Friday’s performance features Russian violinist-conductor Vladimir Spivakov and soprano Hibla Gerzmava, both of whom signed the pro-Putin letter. Protesters say the letter, which was circulated by the Russian Ministry of Culture, is a potent piece of propaganda, bolstering support for an aggressive policy that’s been condemned by the West.

“We are protesting Russian artists who use their fame to support Putin’s regime,’’ said Dmitry Smelansky, whose group, Arts Against Aggression, has called on Emerson College to reconsider the event. “I was shocked that Emerson, with its reputation, would do something like this.’’

The controversy places Emerson in a difficult position. The school is not formally presenting the concert by the Moscow Virtuosi Chamber Orchestra. Rather, it has rented the theater to Maestro Artist Management, a touring and production company that booked the concert as part of the Cherry Orchard Festival.

“Emerson College does not, through its facility rentals, make any implicit or explicit endorsement of individual political views held by the performers or producers,’’ a spokeswoman for Emerson said in a statement. She added, “Emerson does not censor the public’s response to art and believes the group is entitled to its opinions and a way to express them.’’

To that end, the school, which has not formally responded to an open letter from Arts Against Aggression, said it would provide security and is preparing an area near the theater for the activists to congregate.

But protesters say the school needs to do more.

“I want them to acknowledge that this does not fit their values, and I want them to pledge that this will not happen again,’’ said organizer Julia Beloborodov. “It is embarrassing for a flagship cultural institution in Boston that says it stands against the grabbing of power and the persecution of minorities to turn around and say: No, it’s OK — the Putin guys, they can perform.’’

Maestro Artist Management president Maria Shclover defended the upcoming performance, saying the Cherry Orchard Festival, which she cofounded, “is trying to separate the culture from politics.’’

“We are not into politics, not supported by any political organization or affiliated to any government,’’ Shclover said via e-mail, noting that both Spivakov and Gerzmava are on the festival’s advisory board. “We are presenting the highest level of arts, theater, and classical music there is in the world.’’

Russia drew international censure in 2014 when it invaded Ukraine and annexed the Crimean peninsula. The State Department affirmed last March that US sanctions against Russia would remain intact “until Russia returns control of the peninsula to Ukraine,’’ citing Russia’s “continued violation of international law.’’

Smelansky said that Friday’s demonstration will be relatively small, with leafletting, music, and a gruesome mannequin display, marking the fifth time the group has protested a Boston cultural event. It has previously targeted performances by pianist Denis Matsuev and Spivakov, who was interrupted at Harvard University in 2014 when a protester stormed the stage before being arrested. Similar protests have dogged performers in New York, Philadelphia, London, and other cities.

But with investigations into Russian tampering in the US election and contacts with the Trump campaign recently making headlines, protesters hope their message about Russian propaganda will strike a chord with American audiences.

It’s taken the United States “2½ years to wake up and say, ‘What just happened here? Oh, this wasn’t just fake news on my Facebook feed,’ ’’ said Beloborodov. “This really is a hybrid war: This is news, this is culture, this is Internet. This is your favorite artist as emissary for the Kremlin regime.’’

Shclover said that she and her company “sympathize with the cause the group is defending,’’ but that life for Russian artists can be complicated.

“To understand what is really going on in Russia and why people sometimes are forced to sign the letters, you either have to know a lot about Russian history or have to be born there,’’ she said. “Not everything is black and white.’’

Spivakov and Gerzmava did not respond to requests for comment. In a 2014 interview with the Russian state newspaper Rossiyskaya Gazeta, however, Spivakov reportedly said he “did not regret signing a letter in support of Putin, although it cost me a lot of reflection.’’

Pavel Gintov, a Ukrainian concert pianist who studied at the Moscow Conservatory, said that times have changed since artists like Dmitri Shostakovich were pressured to join the Communist Party.

“It’s not like somebody is going to arrest them and send them to Siberia if they don’t comply,’’ Gintov told the Globe.

“These people travel all over the world. They have houses in different countries. It’s just very convenient when you are in power’s favor. It can give you opportunities, can help you build theaters, can help you play concerts and tour in America.’’

Some signers to the original letter were unapologetic. Eduard Boyakov, former rector of the Voronezh State Academy of Arts, for example, argued at the time that “aggression is coming from the West, not Russia.’’

“They are masters at what they do,’’ said Shclover. “They are coming here to perform and their art should explain all.’’

Smelansky said his pro-Ukrainian associates are planning similar protests in other cities.