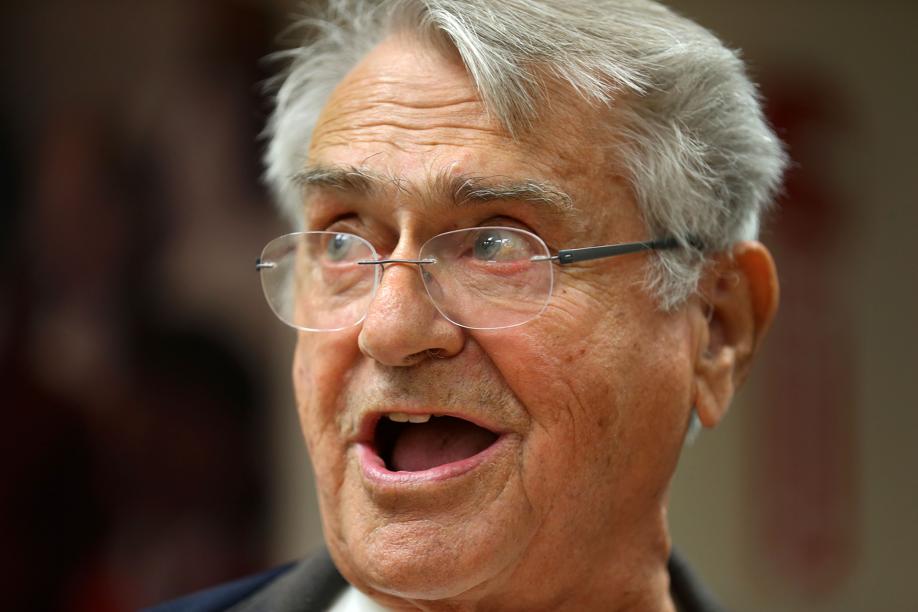 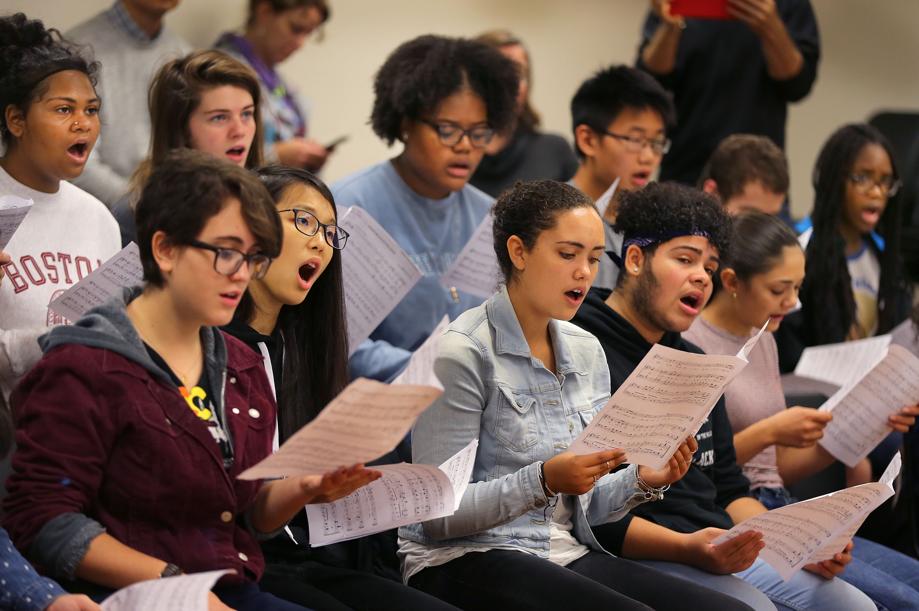 Members of the Boston Children’s Chorus rehearsed for their performance at Symphony Hall, where they will sing the finale from the opera “Brundibár.’’ 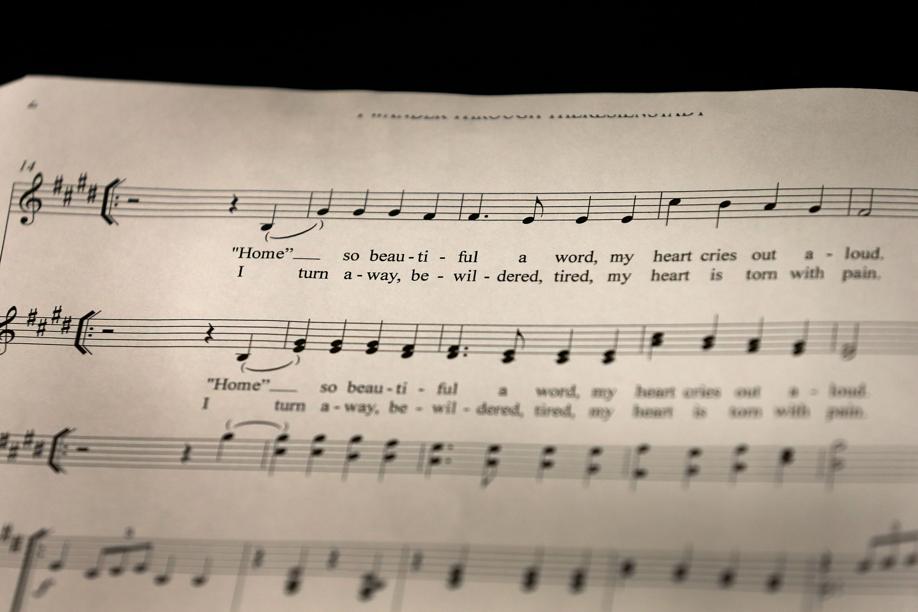 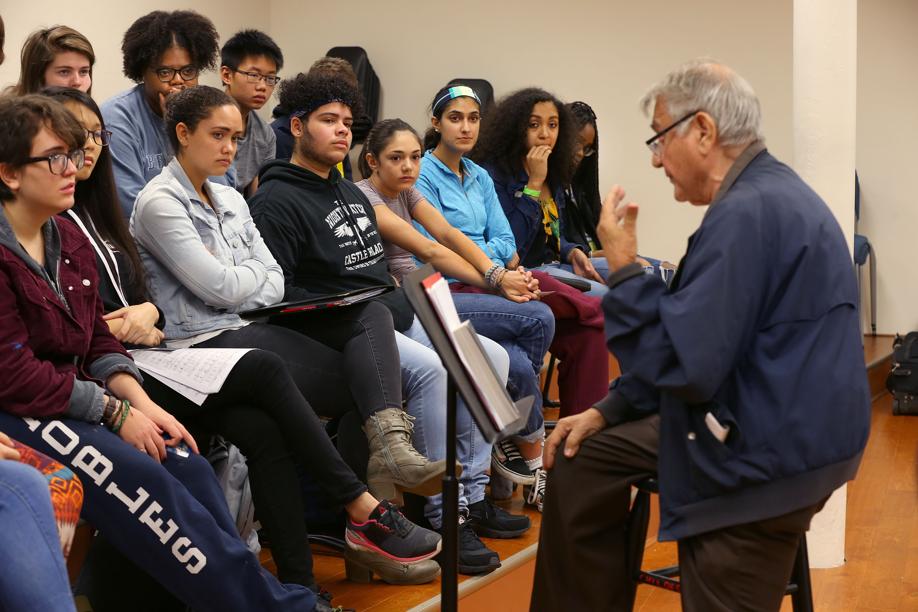 The children’s opera “Brundibár’’ ends on a triumphant note. The chorus sings: “We’ve won a victory over the tyrant mean, sound trumpets, beat your drum, and show us your esteem!’’

But when Brookline resident Michael Gruenbaum, 87, performed the jubilant lyrics for the first time in 1943, he was a prisoner at Terezín, or Theresienstadt, a Jewish ghetto and concentration camp about 30 miles outside Prague.

“There wasn’t that much good in Terezín . . . It was a pretty miserable existence,’’ Gruenbaum said. Performing the opera “was a highlight for us. We were free singing.’’

The camp where about 33,000 Jews died and another 88,000 languished before they were shipped to death camps was bleak, but the conditions didn’t stop musicians, artists, and writers who were imprisoned there from creating.

On Sunday, the Terezín Music Foundation celebrates those creators and the contributions they made at a gala at Symphony Hall in Boston. Gruenbaum plans to appear with the Boston Children’s Chorus to sing the finale from “Brundibár.’’

Composer Hans Krása wrote the opera before he was sent to Terezín and then reworked it while he was in the ghetto. It was performed 55 times in the camp, Gruenbaum said

“The finale, it’s very uplifting. We won this fight and the bad guy lost,’’ said Gruenbaum, who was 12 years old when he was sent to Terezín with his mother and sister in 1942. A year earlier, Nazis killed his father, Karl.

The concert’s title, “Do Not Forget Me,’’ was taken from a note written by composer Gideon Klein, whose “String Trio’’ will also be performed Sunday. He was imprisoned at Terezín and died in January 1945 after being sent to another camp.

“It was the last thing he wrote before he was killed,’’ said Mark Ludwig, who established the Terezín Music Foundation in 1991. “He knows what his destiny is, what his fate will be.’’

Ludwig, 60, who also plays viola with the Boston Symphony Orchestra, said the concert is a multimedia journey through the history, art, and music of Terezín. Other performers include soprano Charity Tillemann-Dick, tenor Fran Rogers, and broadcaster Jim Braude, who will narrate.

The program will also feature photographs of Terezín composers before the war, artwork created in the camp, and a propaganda video orchestrated by the Nazis to give outsiders the false impression that Jews were being treated well there.

“Imagine a concentration camp setting where people are creating great art, great music, great poetry while they’re starving, dying,’’ said Ludwig. “It shows you the power of the arts.’’

Khizr Khan is attending to accept the Terezín Legacy Award. He is the Gold Star father who electrified the 2016 Democratic National Convention with his rebuke of Donald Trump, who was then the Republican presidential nominee.

The story of Terezín offers a timely reminder of what can happen “when you don’t watch out and protect our democratic way of living,’’ said Anna Ornstein, a 90-year-old Auschwitz survivor, psychiatrist, and education director for the music foundation.

“I have seen what hate can do to people’s psychology. They get carried away. They are looking for scapegoats. It was the Jews; now it’s the immigrants,’’ she said. “It is important to remember what can happen when our democratic way of life is interfered with or destroyed.’’

Gruenbaum has performed “Brundibár’’ one other time since World War II. Three years ago, he and Ela Weissberger, another Terezín survivor, sang the opera during a concert with the music foundation.

“Brundibár’’ tells the story of a brother and sister who sing at a market to earn money to buy milk for their sick mother until they are chased away by an organ grinder named Brundibár.

The siblings enlist a sparrow, cat, dog, and other children to banish him from the market.

Gruenbaum said he remembers performances of “Brundibár’’ as the only time he didn’t have to wear a yellow star of David that read, “Jude.’’

“Brundibár was Hitler for us,’’ said Gruenbaum, who wrote about his Holocaust experience in a memoir called “Somewhere There is Still a Sun.’’ “We were hoping that we would win the war and he would be defeated.’’

Matthew Walensky, 15, a baritone with the Boston Children’s Chorus, said he recognized the name of the concentration camp when he got the sheet music for “I Wander Through Theresienstadt,’’ a song by Ilse Weber, another Terezín composer. The piece will also be performed Sunday.

He said he recently called a distant relative who survived the Holocaust to tell him about the music he’s performing.

“I felt that I had to sing with more passion than I ever had just because I felt an immediate connection to this,’’ said Walensky, who lives in Newton. “I just feel it’s my duty to keep these songs and this history alive.’’