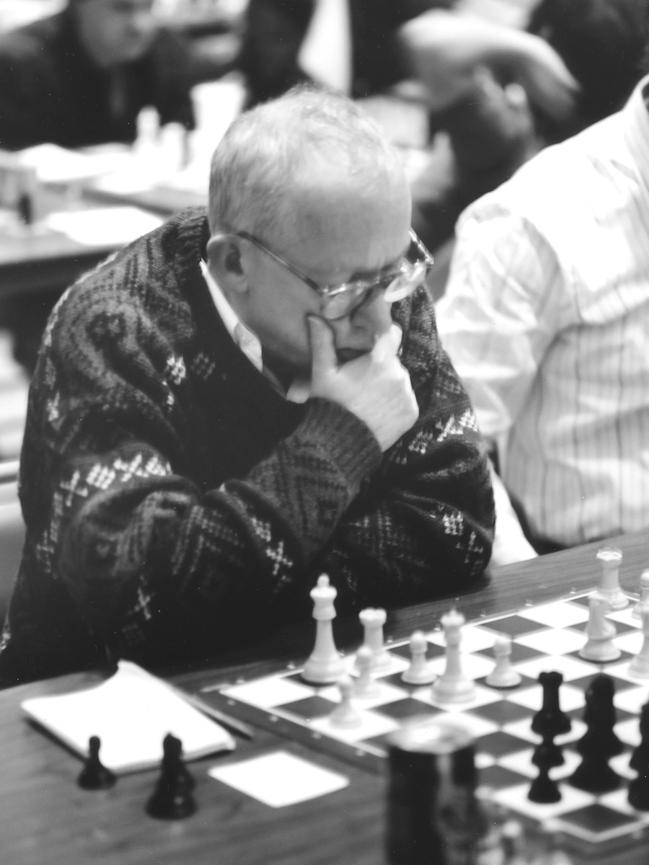 In March 1964, Harold Dondis was carried out of the Wachusett Chess Club in Fitchburg on the shoulders of his peers after he defeated future world champion Bobby Fischer.

At the time, Mr. Dondis was president of the Massachusetts State Chess Association, and he set off the celebration by taking just 19 moves to defeat Fischer — then a 20-year-old grandmaster and US professional champion.

Fischer might have been a bit weary as he maneuvered through the overflow crowd at the Wachusett Chess Club while playing a so-called simul exhibition match against 56 separate opponents at the same time.

“I’ve never seen that in chess,’’ Mr. Dondis said of his triumphant exit in a 2004 interview with Chess Horizons, the magazine of what is now the Massachusetts Chess Association. He added that “Fischer erred against me, and a move later graciously resigned. . . . I could never do that again.’’

Mr. Dondis, a writer of the Globe’s Chess Notes column from 1964 until last month, died of a heart attack Dec. 10 while playing the game he loved at the Boylston Chess Club in Cambridge. He was 93 and lived in Belmont.

In 1972, Mr. Dondis met Fischer again while observing the World Chess Championship in Reykjavik, Iceland, where Fischer defeated Boris Spassky. A year earlier, Mr. Dondis described Fischer in a front-page Globe profile: “He is a handsome, athletic, nattily dressed 6-foot bachelor. He very frankly plays chess for money. In a game where complex theory and PhD players abound, Fischer is an uneducated, gruff, and badly-mannered person who says what he thinks, with little or no delicacy. His attitude toward the Russian players is one of complete disdain.’’

A lawyer, Mr. Dondis was affiliated for 70 years with the Boston firm Rich May, where the library is named in his honor. He also had received the US Chess Federation’s Distinguished Service Award, and in a tribute, the Boylston club set up his chess board with the pieces arranged in their final position when he defeated Fischer.

“As a chess journalist, a community benefactor, and an avid player until his very last day, he was absolutely integral to the vitality of the game in the Commonwealth,’’ said Nathan Smolensky, president of the Massachusetts Chess Association.

Mr. Dondis’s last Globe column appeared Dec. 14. Several days later, Chris Chase, his co-writer the past two years and a chess senior master, wrote in the Globe that “the chess community has lost a great benefactor, and I have lost a wonderful friend.’’

Mr. Dondis had achieved the expert player level and competed in tournaments including the Bermuda International and US Open. He also was a founder and former chairman of the US Chess Trust, the former charitable arm of the US Chess Federation. His own generosity helped the Boylston Chess Club move recently into new quarters. A club member since the 1960s, he set up a fund with the Trust that will continue to benefit the club.

In a blog dedicated to Mr. Dondis after his death, the Boylston club recognized his selfless nature, noting that when its board wanted to dedicate a room in his name, Mr. Dondis requested that the honor be given instead to his late friend Harry Lyman.

At Rich May, Mr. Dondis was a former managing director. A specialist in corporate and public utility law and estate planning taxation, he kept brief descriptions of US Supreme Court and Massachusetts Supreme Judicial Court rulings in notebooks and on index cards to aid his research.

During chess matches, he sometimes read those summaries between moves, which raised the eyebrows of some opponents.

Mr. Dondis argued a case opposing a federal oil tariff before the US Supreme Court in 1976. He lost and joked afterward that it was one of the rare times the high court agreed unanimously on anything.

“Harold was my mentor. He was very good at thinking through the big picture and teaching me what the real goals were,’’ said James Behnke, a Rich May partner. “He was like a revered older brother who wanted all of us to excel. Harold was a team player in the best possible sense of the word, and he had a dry and quick wit.’’

Stephen Kane, a Rich May managing director, recalled going into the office one Saturday years ago to research a complex issue when he was a first-year associate. “Harold was there and asked what I was working on, and off the top of his head mentioned the three seminal cases I had just recently found and also criticized the legal reasoning in one of the cases,’’ Kane said. “He was a brilliant man.’’

As a boy growing up in Rockland, Maine, Mr. Dondis worked at the Strand Theater, which was owned by his parents, Joseph Dondis and the former Ida Povich. His grandfather, Hyman Dondis, was a founder of Adas Yoshuron Synagogue in Rockland.

When Mr. Dondis attended summer camp as a 10-year-old, he consistently beat his counselor at checkers. “So he taught me chess so he could beat me,’’ Mr. Dondis said in the Chess Horizons interview.

Mr. Dondis went to high school in Rockland and majored in philosophy at Bowdoin College, from which he graduated in 1943. After graduating from Harvard Law School two years later, he was hired by Burns, Blake, and Rich, which is now Rich May.

In 1952, he married Donis Asnin, who became dean of the Boston University School of Public Communication. She died in 1984.

His work as general counsel to the Algonquin Gas Transmission Co. led to his second marriage, to Claire Gott, in 1985.

“I was the secretary to one of the managers there and we found that we shared a love of literature,’’ she said. “Harold could quote Shakespeare, and Boswell’s ‘Life of Samuel Johnson’ was his favorite book. He was friendly with everybody from the mailroom to the front office — always easy to talk to.’’

A service has been held for Mr. Dondis in Belmont, and a private memorial service in Maine is planned for the spring.

“Harold loved coming back to Maine for Thanksgiving or to visit friends from high school,’’ said his niece Jo of Camden, Maine, “and he taught every kid in our family about chess, which made him very happy.’’

Her daughter, Drew Himmelstein, was 11 when she learned to play. Mr. Dondis promptly sent three books on chess strategy.

The evening after Mr. Dondis died, Himmelstein and her husband played a game in his memory.

“Maybe if I’d read through Harold’s chess books, my opening moves would have been more intimidating,’’ she wrote in “My Great-Uncle Beat Bobby Fischer at Chess,’’ a tribute she published in the Jewish News Weekly of Northern California, where she is a staff writer. “But having even a small view into what Harold loved about chess, I will always find beauty in playing the game.’’

Marvin Pave can be reached at marvin.pave@rcn.com.

PREVIOUS ARTICLE
Article 61 of 148
NEXT ARTICLE