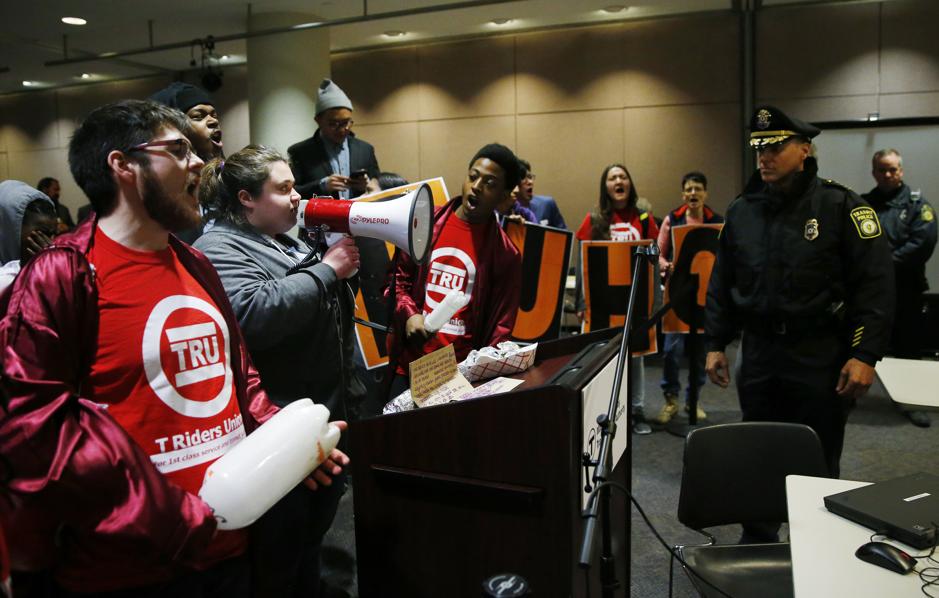 MBTA fares will rise by an average of 9.3 percent in July, after the transit agency board Monday unanimously approved increases despite protesters briefly drowning out the proceedings.

The cost to ride MBTA buses with a CharlieCard will increase a dime, to $1.70. Monthly passes for bus and subway rides will cost riders $114 more per year.

The price increases come despite a flood of opposition from dissatisfied riders and several elected officials who said lawmakers in 2013 passed a law intended to cap increases at 5 percent every two years. The last fare hike was in 2014.

Monday’s hike is one of the most controversial moves to date by the fiscal control board created by Governor Charlie Baker.

“How dare the MBTA raise fares when we have to pay more and more for worse and worse service?’’ Rebecca Gorlin of Roslindale asked the board shortly before the vote.

Board members and MBTA officials said they believe the money is needed to put the MBTA on firmer financial footing. Board chairman Joseph Aiello said fare hikes are never popular, but the board hopes it can use the extra revenue to improve service. The increases are expected to generate about $42 million for the MBTA.

“Our intent, first and foremost, is to try and make sure we’re continuing to deliver better service,’’ Aiello said. “That takes money.’’

Commuter rail monthly passes will increase between 4.9 percent and 10 percent, which could mean big increases for riders already paying some of the highest fares. The new costs range from $84.50 for passes for commuter rail Zone 1A (which covers mostly stations in Boston) to $398.25 for passes in Zone 10. For Zone 10 riders, who commute to and from North Kingstown, R.I., that means an extra $435 a year.

Some people will get a break, though: The plan will reduce cash bus fares by a dime, to $2, which board member Brian Lang said will help alleviate the effect on some low-income riders — an issue he said is of concern to the board.

Brian Shortsleeve, the MBTA’s chief administrator, said the agency wanted to make sure fare increase revenue went toward crucial capital projects. For example, he said, the MBTA would spend more this year on improving its signals, which contribute to about a third of its delays.

“The commitment that we’re taking today is that every dollar of this fare increase is going to be used to improve service,’’ he said.

The fare increases were met Monday with protests from activists and riders who said the hikes will hit low-income riders hardest.

Shortly before the board voted, about 20 activists took over the meeting and tried to block the vote. Caroline Casey, an organizer with the T Riders Union, wielded a bullhorn and led activists through chants of “Fight the hike.’’

The board adjourned and then returned about 20 minutes later. Members voted, despite being drowned out by activists calling for them to disband.

Transportation Secretary Stephanie Pollack said it was a “pity’’ the protesters didn’t listen to the discussion over fares and said they represented a small percentage of riders. She said board members decided to vote amid the yelling, rather than forcibly removing the protesters from the meeting.

In 2014, the MBTA increased prices between 5 and 7 percent. Before that, a 2012 hike raised fares by an average of about 23 percent systemwide — an increase so high that it helped push lawmakers to place a cap on fare hikes with a 2013 law.

Board members Monday said they understood the challenges that hikes could place on riders and sought to alleviate some.

For weeks, Boston Public Schools parents and officials had protested plans that would have increased the cost of student passes by about 23 percent. They said such a hike would hurt low-income families, as well as the budget of Boston Public Schools, which provides the passes to many of its students.

T officials responded, lowering the new cost of student passes from $32 to $30 per month, which is a 15 percent hike. Officials will also offer an expanded student pass program for a year that could reach more students.

In addition, MBTA officials lowered the new cost for senior passes from $32 to $30 per month, as well as the new price for monthly bus passes from $59.75 to $55.

Even before MBTA officials announced its specific proposals for fare hikes, some lawmakers had objected to the idea of increasing fares higher than 5 percent. Several Democratic lawmakers pointed to the 2013 law, which had often been interpreted as capping the MBTA’s fare increases to 5 percent every two years.

But MBTA general counsel John Englander and Pollack argued that the law’s language allows the agency to raise fares up to 10 percent every two years.

Before the vote, state Senator Thomas M. McGee, cochairman of the Legislature’s Joint Committee on Transportation, said he still believed that raising fares above 5 percent would be a mistake.

Advocates also cried foul because the MBTA’s proposals included raising the price of some passes by substantially more than 5 or 10 percent — which they interpreted as a violation of the spirit of the law capping fare hikes. But T officials have said that they can do so because, legally, passes are not considered fares. Instead, officials say, they are considered discounts.

Before Monday’s vote, the MBTA held 10 public meetings and collected 8,000 responses from the public. At several meetings, those who testified were overwhelmingly against the proposed fare increases, asking the board to keep increases to 5 percent — or to reject any increases at all.

“As a result of today’s fare increase, there will be people who will miss school, work opportunities, and important social service appointments,’’ he wrote in an e-mail.

State Senator Jamie Eldridge, a Democrat from Acton who cochairs the Legislature’s MBTA caucus, also said he was troubled by the hikes.

“We’re concerned about the impact it could have on working families, who will be deciding if they can’t afford these fare hikes,’’ he said. “A 10 percent increase is significant, and I think there should be another approach to raising revenue that’s not a burden to people often struggling to get to work.’’

PREVIOUS ARTICLE
Article 5 of 148
NEXT ARTICLE