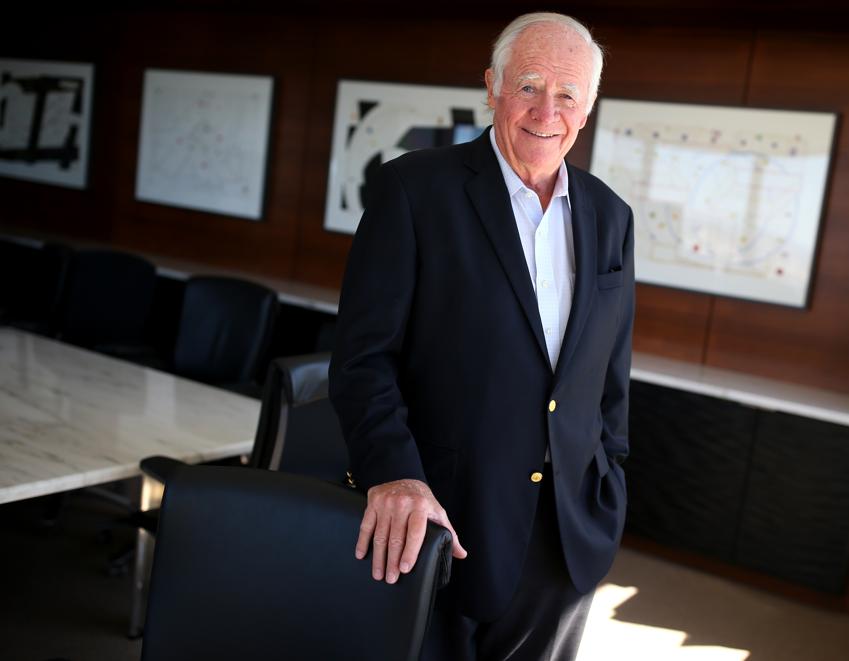 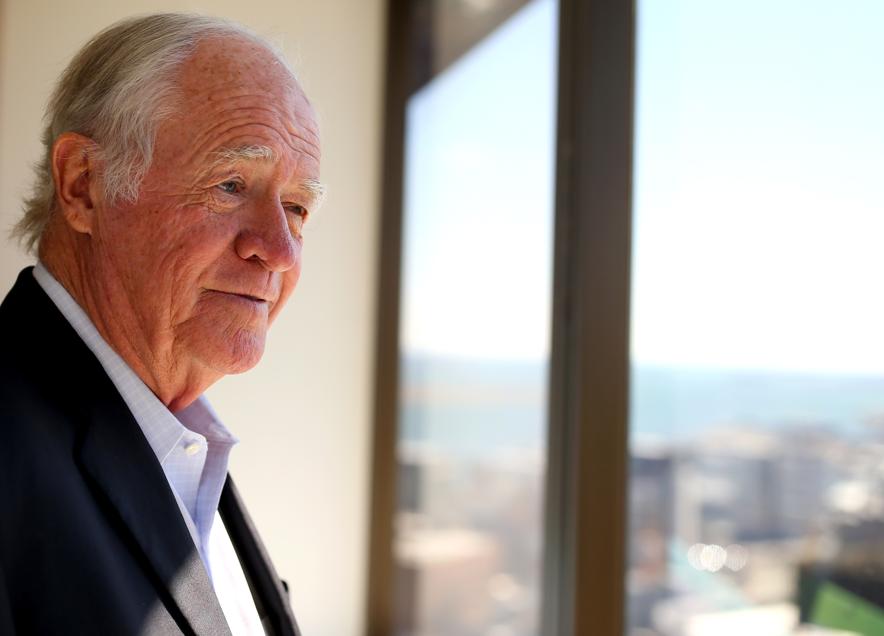 Chad Gifford is retiring from the Bank of America board of directors. Though he has only worked for one company, it has gone through five names through mergers: First National Bank of Boston, Bank of Boston, BankBoston, FleetBoston Financial, and Bank of America. In his view, banks need to be strong and well-capitalized to handle the increasingly complex transactions of their clients. (Jonathan Wiggs/Globe Staff)
By Shirley Leung
Globe Staff

After all, he spent half a century striking deal after deal to help create what is today Bank of America.

When he sees both Republican presidential front-runner Donald Trump and US Senator Elizabeth Warren find common ground attacking bankers, Gifford is beside himself.

“That drives me crazy,’’ said the 73-year-old banker, who will retire next month from the board of Bank of America. “We have not done a good enough job explaining the importance of big banks.’’

By “we,’’ he means the banking industry, which has become the boogeyman for what’s wrong with America. If you’re wondering what Gifford’s next act will be, it’s not hard to figure out.

“When politicians talk about big banks or Wall Street, what is Wall Street?’’ he said recently, sitting across a marble-topped conference table on the 32nd floor of Bank of America’s downtown office. “Is it hedge funds? Is it private equity? Is it investment banks? Is it commercial banks? It is the big ones altogether?’’

As a private citizen, Gifford will be freer to say what’s on his mind than as a sitting board member of one of the country’s biggest banks. The monologue would go something like this: Bigger isn’t always bad. Banks need to be well-capitalized to handle the increasingly complex transactions of their clients. Banks need to be strong, American banks in particular, if they want to remain competitive globally. And if you shrink the US banks, foreign behemoths will just fill the void.

In many ways, Gifford is defending his life’s work. He has been a key architect of the biggest financial deals in New England. He reminds me that he has only worked at one company, one that has gone through five names through mergers: First National Bank of Boston, Bank of Boston, BankBoston, FleetBoston Financial, Bank of America.

Gifford served as CEO twice — of BankBoston and then of FleetBoston. After selling FleetBoston for $47 billion in 2004, he joined the board of Bank of America, including a brief stint as its chairman.

All those mergers were necessary, Gifford insists, because banks need economies of scale to thrive.

“We are huge. There is an understandable concern,’’ said Gifford, but “I absolutely disagree with Senator Warren on some of her feelings about large banks. As I said, I think they are absolutely required in the financial system we are in now.’’

Warren, the Massachusetts senator, has been among the banking industry’s most formidable critics. The Democrat has reached across the aisle to work with Republican Senator John McCain to sponsor legislation that would restore a modern-day version of the Glass-Steagall Act, which separated commercial banking from riskier investment bank operations. Congress repealed the law in 1999.

Warren’s take: The Dodd-Frank regulations, created in response to the 2008 financial crisis, don’t go far enough to protect consumers. There’s still risk in the system, and if taxpayers don’t want to fund another bailout or live through another financial meltdown, we need to break up the banks.

“In ’08, the banking industry made some mistakes,’’ Gifford acknowledged. “Banks deserve some of that blame. But the idea that this was singularly caused by the banks is simply uninformed.’’

Wall Streeters — especially those working at hedge funds and private equity firms — also get a bad rap for being paid a king’s ransom. Gifford isn’t a billionaire, but he has been rewarded handsomely, receiving a $16 million package after stepping down as chairman of the board. He was the bank’s highest paid nonmanagement director last year, and as part of a retirement plan, he gets an annuity of about $3.1 million for life.

Gifford’s departure from Bank of America marks the end of an era of a different kind, back when prominent bank executives had time to play an outsized civic role. Their portfolios weren’t as big, their empires not as far-flung.

That allowed Gifford to dabble as a deal maker in other areas, including brokering legislation that persuaded the New England Patriots to build a new stadium in Foxborough instead of moving to Connecticut.

He sat on nonprofit and corporate boards; locally, Gifford is still on the boards of Eversource Energy and Partners HealthCare. He has also been a passionate supporter of Boston public schools. When FleetBoston was sold to Bank of America, he made sure the new owner from North Carolina maintained a certain level of philanthropy in Boston, recalled Anne Finucane, the vice chairman of Bank of America who has worked with Gifford since their FleetBoston days.

Finucane said that Bank of America today gives away more money locally — close to $12 million annually — than Fleet did.

“Chad was — and is — a big presence in Boston,’’ said Finucane, “whether it’s his leadership around the Boston school system or assuring the sale of the Red Sox came through or Gillette Stadium was built.’’

Gifford is also the last of his kind in another respect — in the art of the bank mega deal.

“I don’t see big banks like JPMorgan Chase and Bank of America merging any time soon,’’ said Cathy Minehan, the former president of the Federal Reserve Bank of Boston. “Like everything else, there are pendulums in life. . . . We’re still in the swing of regulation, regulating everything that walks, particularly what exists in the big bank.’’

Which means it’s not clear where Bank of America — and Gifford’s legacy — may end up.

Shirley Leung is a Globe columnist. She can be reached at shirley.leung@globe.com. Follow her on Twitter @leung.

PREVIOUS ARTICLE
Article 74 of 144
NEXT ARTICLE