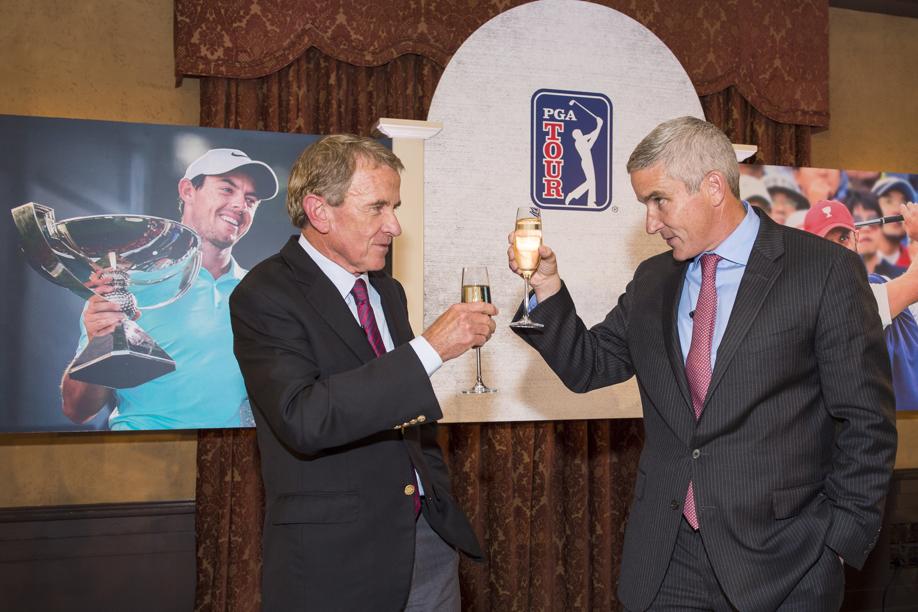 Given our remote-control world, one could fast-forward past the 3,855-mile bicycle ride from Kennebunkport to Seattle, the pain and inspiration of watching his mother fight cancer, the work to return pro golf to the Boston area and reshape Fenway Park operations, the mystique of a glorious father-son tournament, and the nine-day walk in the Himalayas.

Instead, one could go right to the news, that Jay Monahan of Belmont — a guy who knows good chowda and that left of the Pesky Pole is fair play — officially became PGA Tour commissioner 13 days ago, succeeding Tim Finchem, 69, who retired after 22 years.

Impressive, to be safeguarding a multibillion-dollar enterprise at 46. But to skip right to the news, a parade of Monahan admirers will tell you, is to miss the flavor of a man with an uncanny ability to connect, whether he’s asking a stranger for a place to stay while wearing spandex and a grungy beard or negotiating in coat and tie with a CEO.

It comes from within.

“I truly, truly love being around people, to know about them, to talk to them,’’ said Monahan. “I think it’s the ultimate way to get better as a person.’’

A job search at the PGA Tour in the summer of 2008 set in motion conversations at opposite ends of the East Coast.

In Florida, Finchem wanted Waugh’s thoughts on Monahan, a leading candidate to become executive director of The Players Championship, the Tour’s flagship event.

Then the face of the annual Labor Day PGA Tour tournament in Norton, the Deutsche Bank Championship, Waugh told Finchem that Monahan — who had served as tournament director of the DBC in 2003-04 — “was the best I’ve ever seen.’’

Meanwhile, inside the offices of Fenway Sports Management in Boston where they were both vice presidents, Monahan told Sam Kennedy of the offer. Kennedy, who had known Monahan since their days at Trinity, blurted out: “Jay, you’ve got to go. Golf is in your DNA.’’

To Finchem, Waugh added, “Tim, Jay someday could be your replacement.’ ’’

Waugh has been proven prophetic. So, too, Kennedy, now president of the Red Sox, who said Monahan “is as authentic as they come.’’

That Monahan took the job and in eight years advanced within the PGA Tour hierarchy would be considered methodical, but not to be overshadowed is his innate ability to make an immediate impression. It’s why he was entrusted to organize the DBC at 32 and was promoted within a year of arriving to run The Players.

Marveled Finchem one day about Monahan, who lives in Ponte Vedra Beach, Fla., with his wife, Susan, and daughters Sophie, 13, and Phoebe, 10: “He’s from Boston, and he’s Irish. Making a relationship is a slam dunk for him. Makes me jealous.’’

He is Boston the way the “R’’ isn’t, and Kennedy’s point about golf “in the DNA’’ is spot-on. Great-grandfather Joseph W. Monahan was a state senator in the 1930s, then a longtime Probate Judge in Middlesex County. But perhaps he’d prefer his legacy to be the passion for golf that he planted for future generations of Monahans.

Jay’s grandfather played in the 1947 US Amateur; his father, Joseph W. Monahan III, won the 1966 New England Collegiate Golf Association Championship and 35 years later the New England Senior Amateur; his brother Brendan twice won the CYO Championships. Yet what has galvanized this family for decades is an iconic team tournament that dates to 1919, the Winchester Country Club Father-Son.

Though fiercely competitive, Joe III (affectionately called “Joe the Pro’’) and his brother Tommy and their sons have always maintained a perspective that was gifted by “Grannie Annie,’’ the late Anne Monahan, Jay’s grandmother, and Joanne, Jay’s late mother who was the rock in his life.

Credit the influence of “Joe the Pro’’ for Jay’s soft touch and his right-to-left ball flight. But this remarkable presence around people, to listen, to impart loyalty and compassion? It was passed down from a woman whose wake in 2008 saw a receiving line that stretched from Watertown to Belmont.

“I watched the way she treated her three boys and anyone else who came into our lives, how she always had time for them,’’ said Monahan. “Especially when she was going through her own battle with cancer, she would do what she could to help others in their struggles.’’

He is his mother’s son, because in 2003 Jay Monahan was so crushed when IMG colleague Rob Stevens died and left a wife and three children that he teamed with Brian Oates to form “Golf Fights Cancer.’’ The charity has donated nearly $5 million to the cancer fight.

And it was Jay Monahan who visited the family of Thomas Kelly, a former high school coach from South Yarmouth who was tragically killed in a freak accident while riding in a shuttle bus from Gillette Stadium to TPC Boston for the 2003 DBC.

Some would have found it difficult to go. Monahan found it impossible not to go.

“In so many aspects of our life today, things are being dehumanized,’’ said Monahan. “Sometimes you just need to be as good a person as you can be. If you really care about people, it helps to look them in the eye and tell them you’re there for them — even if they might not know that at the time.’’

It helps explain why you’ll get a return call if you ask to speak about Joseph W. “Jay’’ Monahan IV.

“He never forgets who you are and what you mean to him,’’ said college friend Steve Skillman.

Waugh jokes that within a few months of working with Monahan, “I kept meeting people who said they were Jay’s best friend. I said, ‘I’m not sure how a guy has 50 best friends, but OK.’ ’’

Oates, director of sales for the Patriots, believes the total is higher. “Jay’s a Type A person people like to be around. It’s why he’s got a million friends.’’

When Waugh initiated DBC’s interest in being a title sponsor, Paul Spengler, the executive vice president of the Pebble Beach Co., was asked to facilitate a management arrangement with IMG. “Seth made one demand,’’ said Spengler. “That we find a tournament director who really knew Boston.’’

“They got a diamond in the rough,’’ said Spengler, who quickly became Monahan’s “godfather,’’ the wise sage who had been around the PGA Tour tournament scene for years and could soon marvel at his protégé’s polish.

“It’s a wonderful story of an individual who never really expected the next step,’’ said Spengler. “The next steps came to him.’’

OK, he’s golf, but Monahan is Boston to the core, which means he donned the blades for Belmont High School, then a post-grad year at the Lawrenceville School, then in college.

“How you play the game says a lot about your personality,’’ said Monahan’s coach at Trinity, John Dunham. “You can’t hide in hockey. You either stick your nose in there or you sit on the periphery and wait for something to happen.’’

“Jay stuck his nose in there,’’ Dunham said. “He loved to go into the corners. He had a feisty streak to him.’’

In his sophomore year (1990-91), Monahan had 11 goals and 19 assists as the Bantams won the ECAC South championship. His career totals for 87 games were 23-48—71, but stats don’t account for the intangibles.

“He had a way of bringing everyone together,’’ Dunham said. “The totality of the kid was remarkable.’’

When Brendan, two years younger, joined Jay at Trinity and was his teammate in hockey and golf, the college experience was virtually complete. It just needed an exclamation mark and for that, credit “Joe the Pro.’’

On graduation night in 1993, there was a celebratory gathering and three Psi Upsilon brothers — Skillman, Peter Knight, and Rob Krebs — talked of their bike ride across America to support the American Red Cross.

“I didn’t buy you a graduation gift, so I’m buying you a bike,’’ said Joe, and the next day Jay joined his frat brothers at the starting line in Kennebunkport. They dipped their bike tires in the ocean and pointed toward Seattle.

“They say you should go in the other direction, but it’s the way we drew it up,’’ laughed Monahan.

They stayed in campgrounds, where possible, and slept two to a 3½-by-6½ tent.

“All these guys who say they’re Jay’s ‘best friend,’ ’’ said Skillman. “Well, I’m the only one who can say I slept in a tent with him for nearly 50 nights. I’m just not sure that’s a bragging point or a badge of shame.’’

When campgrounds weren’t available, the men knocked on church doors and private homes.

“I don’t ever remember getting turned away, which is incredible considering what we looked like,’’ said Monahan.

The takeaway from 55 days cycling across the country?

“Spontaneous adventure is a wonderful thing,’’ said Monahan. “I enjoy taking challenges like that, to figure out how to get it done. It’s fulfilling to push yourself beyond what you think you can do.’’

There are those who will suggest that Monahan is in the right spot then, because like any pro sports league, the PGA Tour is facing changing times. But to naysayers who see a media landscape that is altering by the hour and a calendar that is jam-packed, Monahan smiles.

“People say they are challenges, but I see them as opportunities,’’ he said.

It is what Finchem admires about Monahan.

“He doesn’t have a negative moment in his day,’’ said Finchem. “I mean, he is a total glass-is-half-full individual, and I think you’ll see that as we go forward.’’

When Finchem’s tenure began in 1994, PGA Tour purses were at $56.4 million; the Presidents Cup was making its debut; there were no World Golf Championships, no FedEx Cup playoffs, no Golf Channel, no PGA Tour affiliates in Canada and Latin America and China, no International Golf Federation, and no Olympic golf.

As he leaves, purses for 2016-17 total $338.8 million and all those other pieces are in play. Quite a legacy, and Finchem insists it’s in good hands.

No cellphones. No Internet. No worries — not for then, not for the future.

A trail of success at Arnold Advertising, Woolf Associates, EMC, as tournament director of the DBC, at FSM, and eight years in training at the PGA Tour bodes well for Monahan as PGA Tour commissioner.

“It will look like a calmer and gentler Tour, but he does have a steel backbone,’’ said Waugh. “He’s not afraid to say no, but he tries to say yes.’’

Monahan counts MLB commissioner Rob Manfred as a friend, and it’s not forgotten by Red Sox ownership that it was Monahan who spearheaded improvements to Fenway Park by creating the EMC Club and State Street Pavilion.

“There was a trust factor, so much appreciation and respect [at FSM],’’ said Monahan.

That he worked there with two great Trinity friends who went on to distinguished jobs in the sports world — Kennedy with the Red Sox, and Billy Hogan as chief commercial officer with Liverpool of the Premier League — is surreal, Monahan said.

Kennedy agrees, but insists this part is very real: “In college, we would talk about Jay becoming commissioner of the PGA Tour.’’

PREVIOUS ARTICLE
Article 72 of 243
NEXT ARTICLE