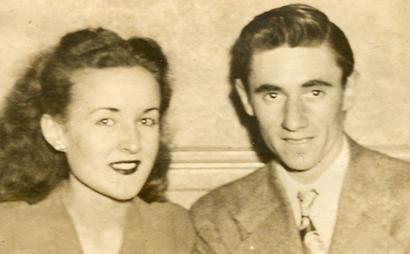 William and June Bratton spent 65 years together. He cared for his ill wife at home during the year she died.
By Bryan Marquard
Globe Staff

Money was never plentiful in the Bratton family’s Dorchester household in the 1950s, so William and June were careful how they spent what they had to support their two children, and Mrs. Bratton gave her husband a little cash to buy meals during his seemingly endless hours working two full-time jobs.

“He used to have just so much every day for lunch money,’’ said their daughter, Patricia of Rockland. “Some days he wouldn’t buy lunch and on his way home he’d call my mother and say, ‘Are the kids up? Do you want pizza or Chinese food?’ He’d take his lunch money and buy it, and he wouldn’t eat it. He’d buy it for us as a treat.’’

Her father, she added, “would do anything for his family. And it wasn’t a sacrifice for him. He loved doing it. He was something special.’’

He spent his life taking care of his children and his wife, including tending to June daily when she was ill before her death in 2007. In years past, he was a Navy gunner and a longshoreman. He sorted mail at a post office and worked in a metal-plating shop. But most of all he was a husband and a father. Mr. Bratton, who had been diagnosed with a brain tumor, died in hospice care Thursday. He was 89 and had lived in Weymouth since 1975.

“I thought my father was the toughest guy who ever lived. He was a little guy, 5 foot 8, thin, about 130 pounds, but, boy, you didn’t want to see him mad,’’ his son, William J. Bratton, wrote in his 1998 memoir “Turnaround: How America’s Top Cop Reversed the Crime Epidemic.’’

At home, June Bratton called her husband Big Billy and their son Little Billy, though he grew bigger than his wiry father and became a top police official. He was commissioner in Boston, chief in Los Angeles, and currently is in his second tenure as New York City’s police commissioner.

The commissioner’s father, William E. Bratton, grew up in Charlestown, the youngest of four sons born to James Bratton and the former Mary Sullivan. She died shortly after Mr. Bratton was born on July 28, 1926. The boys were split up among relatives and Mr. Bratton ended up in the home of an aunt who did not treat him kindly.

“As the youngest of four brothers in the hand-me-down era, he had what I call a hardscrabble life, but he could look back and laugh about it and tell crazy stories,’’ his son said in an interview.

That childhood helped shape Mr. Bratton into the husband and father he would become.

“Somewhere along the line, my father developed the confidence that he could handle whatever came along,’’ his son wrote in his memoir. “You could tell in the way he carried himself. He never swaggered, but he didn’t back down. In my parents’ social circle, he was looked up to as the solid one, the good, hard-working, decent guy, the best at what he does, the rock, with a nice way about him. My sister and I were crazy about him.’’

Patricia said their father “was just one of the best men I’ve met in my life. There was nothing he couldn’t do. Whatever you asked, he would find a way to do it.’’

One thing he wanted to do was marry June M. DeViller, who had been dating his older brother Joe. “Dad was with a couple of friends and needed a light for a cigarette. He went over to Joe, got his light, saw my mother, and that was it,’’ their son said. “He literally elbowed his way in and elbowed his brother out of the way.’’

June had also lived in Charlestown, but her family moved to Dorchester. Before World War II, “Dad every night would go over to Dorchester to hang around with her,’’ their son said. “If he had a nickel, he’d take the train and trolley back. If he didn’t, he’d walk home.’’

They married in 1946, after he returned from serving as a gunner in the Navy on the aircraft carrier USS Randolph during World War II in the Pacific, where he saw considerable action. Reticent about his experiences initially, Mr. Bratton opened up more as he grew older. “You can imagine being 18 years old, kamikazes coming at you, loading those 40-millimeter antiaircraft shells for all you’re worth,’’ his son said.

Back home, Mr. Bratton at first was a longshoreman, hefting loads that were more than two-thirds his weight. Then he got a job at a chrome-plating shop in Dorchester, which he supplemented with the mail-sorting position at the post office. Sometimes he returned home from the metal shop for a late-afternoon dinner before working 6 p.m. to 2 a.m. at the post office. Other times, he worked a different postal shift and slept a few hours before heading out before midnight and going straight from post office to plating plant in the morning. He had only one full day off each week.

“I remember every Sunday we’d go out for a little ride and hours later we’d be in New Hampshire,’’ Patricia said. “We always had a great time, every Sunday.’’

In later years, Mr. Bratton remained close to his two children, to his grandsons David in Los Angeles and Kyle Bratton-Oestreich, an Air Force lieutenant, and to his great-grandchildren Nicholas and John, but Mrs. Bratton was always his principal focus.

Through all of their 65 years together, 61 of them in marriage, he “was very, very devoted to my mom,’’ Patricia said. “Billy and I couldn’t have had any better two parents.’’

“I consider myself a lucky man,’’ Patricia’s brother said. “You don’t get to pick your parents, but boy, I hit the lottery with both of mine.’’

Mr. Bratton cared for Mrs. Bratton at home in 2007 when she died of emphysema and congestive heart failure, and then he visited the cemetery daily until he could no longer manage the visits alone.

And still “he went two or three times a week without fail,’’ Patricia said. “Even when he was ill, we’d take him when he wasn’t able to go by himself. If we were going to the doctor, he’d say, ‘Can we swing by the cemetery?’ ’’

Bryan Marquard can be reached at bryan.marquard@globe.com.

PREVIOUS ARTICLE
Article 67 of 148
NEXT ARTICLE