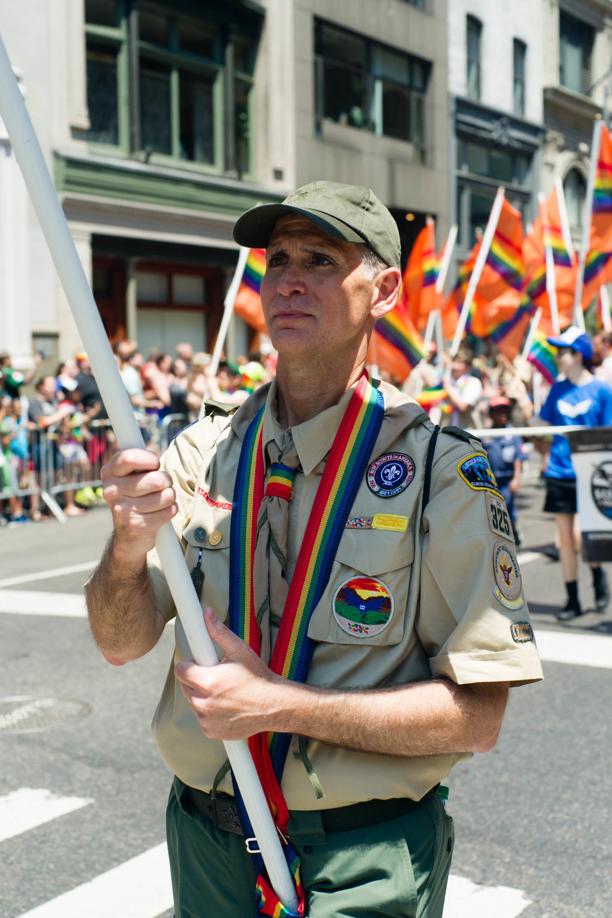 NEW YORK — There were dire warnings for the Boy Scouts of America a year ago when the group’s leaders, under intense pressure, voted to end a longstanding ban on participation by openly gay adults.

Several of the biggest sponsors of Scout units, including the Roman Catholic, Mormon and Southern Baptist churches, were openly dismayed, raising the prospect of mass defections.

Remarkably, nearly 12 months after the BSA National Executive Board’s decision, the Boy Scouts seem more robust than they have in many years.

Youth membership is on the verge of stabilizing after a prolonged decline, corporations which halted donations because of the ban have resumed their support, and the vast majority of units affiliated with conservative religious denominations have remained in the fold — still free to exclude gay adults if that’s in accordance with their religious doctrine.

Catholic Bishop Robert Guglielmone of Charleston, S.C., whose duties include coordinating with the National Catholic Committee on Scouting, says he knows of no instances in which a Catholic unit — there are more than 7,500 — has taken on an openly gay adult leader since the policy change. Gay sex and same-sex marriage are considered violations of church teaching.

Leaders of the Southern Baptist Convention were unhappy with the BSA’s easing of the ban on gay adults, but did not call on individual churches to disaffiliate with troops that they sponsored.

A year later, the number of Southern Baptist churches that did cut ties with Scouting is ‘‘in the double digits,’’ far outnumbered by those who continued their sponsorships, according to Ted S. Spangenberg Jr., president of the executive board of the Association of Baptists for Scouting.

‘‘We kind of like the way it looks,’’ Spangenberg said. ‘‘If you’re faith-based, it’s within your right to select the adult leaders who are going to uphold the tenets of your faith.’’

In April 2015, the Greater New York Councils played a key role in the BSA policy change, defying the ban by hiring an 18-year-old gay Eagle Scout to work at one of its camps.

Mason said the aftermath of the change has been overwhelmingly positive in New York. Some corporations and liberal religious groups that cut ties with the Scouts have restored them, he said, while the Catholic archdiocese has remained fully active.

Until last year, the Boy Scouts had adhered to a ban on gay adults for more than three decades, even taking a case to the US Supreme Court in 2000, when it won a 5-to-4 decision upholding its right to have exclusionary membership policies.

That ruling fueled protests against the BSA by gay-rights supporters. After internal debate, the BSA leadership decided in 2013 to allow participation by openly gay youth. But it faced continued pressure to ease its ban on gay adults serving as paid staff or volunteers.

At the urging of Robert Gates, the former defense secretary who was BSA president at the time, the Scouts’ National Executive Board voted, 45 to 12, on July 27, 2015, to end the ban on gay adult leaders while allowing church-sponsored units to maintain the exclusion for religious reasons.

Like other youth organizations, the Boy Scouts have experienced a membership decline in recent decades. Current youth participation, according to the BSA, is about 2.35 million, down from 2.6 million in 2013 and more than 4 million in peak years of the past.

However, Gates, in a speech in May before stepping down as BSA president, said there were encouraging trends, with the overall rate of decline slowing and an increase in the number of boys joining Cub Scouts.

Though the policy change did not trigger massive defections, there were some emphatic departures.

The Catholic bishop of Bismarck, N.D., David Kagan, announced his diocese would end its affiliation. In addition, about 20 Catholic parishes around the country dropped their sponsorship of Scout troops, according to Guglielmone.

In Appleton, Wis., Faith Lutheran Church severed its ties with Scout units it had sponsored for 60 years.

PREVIOUS ARTICLE
Article 18 of 220
NEXT ARTICLE