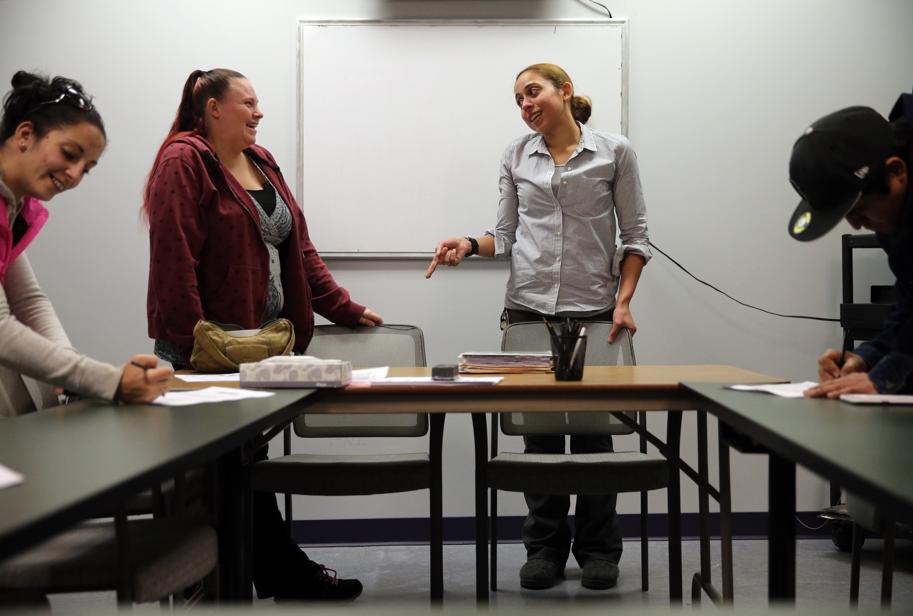 A woman identifying herself as Carol walked on Pleasant Street in the Flint neighborhood of Fall River. She said drug dealing is common in the area and she does not like to go out. (Photos by Craig F. Walker/Globe Staff)
By Brian MacQuarrie
Globe Staff

FALL RIVER — When the opioid epidemic seized public attention in Massachusetts two years ago, and families and politicians demanded action, the plot seemed clipped from a horror movie that Fall River had seen before.

Heroin has been the drug of choice for decades here, and some people in this gritty port city wondered why their suffering — deadly and intractable — had been overlooked for so long.

“Nobody until recently has paid any attention to it,’’ said Nancy Paull, chief executive officer of Stanley Street Treatment and Resources, a nonprofit health care and social service agency in Fall River. “I have often felt our work marginalized by people.’’

That might be changing. After a push from Police Chief Daniel Racine and US Representative Joseph P. Kennedy III, among others, the city will receive federal help to disrupt the heroin pipeline that delivers a steady stream of addiction here.

That assistance follows the federal designation of Fall River and the rest of of Bristol County as a High Intensity Drug Trafficking Area, a recent move that enables US agents to help track how the county gets its drugs and where they are coming from.

It’s help that six other Massachusetts counties already had received.

“For some reason, Bristol County was not getting a piece of that pie,’’ Racine said. “Why not 25 years ago? I don’t know.’’

Maybe because much of the city is poor, the problem seemed localized, and the stigma of heroin as a junkie’s problem had been so entrenched. Whatever the reason, the numbers demonstrate the need for a broader strategy.

Paull said the opioid problem in this the city of 88,000 has never been worse in her four-decade career. Paull’s alarm was echoed by Mayor Jasiel F. Correia II, a 24-year-old who joined a drug-prevention coalition at age 13. The youngest mayor in city history called the fight against addiction the top priority of his administration.

“I understand the gravity of the problem,’’ said Correia, who spoke of friends whose lives have been derailed by drugs.

The problem is made more acute here because Fall River is a hub for drug shipments, Correia said. The opioids that come here, primarily heroin, are then broken down for street-level sales in the city and elsewhere, Racine said.

Much of the heroin originates in Mexico, the chief said, and then makes its way to Fall River and other hubs in Bristol County — such as New Bedford, Taunton, and Attleboro — from New York and Providence.

Efforts to stymie the trade have long seemed like a pernicious game of Whac-a-Mole. After one distributor is arrested, Racine said, another arrives almost immediately to fill the void.

In the opioid-scarred Flint section of the city, less than a mile from police headquarters, a middle-age woman walked quickly from a coffee shop to her home. The woman, who identified herself only as Carol, said she rarely ventures outside — even on the recent sunny day when she paused to talk about her neighborhood.

“They buy and sell drugs right out in the open — heroin, crack,’’ said Carol, who has lived in Flint for 32 years. “It’s not uncommon to find needles on the sidewalk, and it’s getting worse.’’

Paull said that parts of Fall River — with furtive drug activity, idle residents on the streets, and buildings in disrepair — remind her of Third World countries she has visited.

It’s a tableau familiar to Brittney Sylvia and Monique M., who are recovering from heroin addiction. Both women received help at Stanley Street, where wide-ranging treatment is available to walk-ins, and both painted a bleak picture of the city where they are raising children.

“I see people walking down the street, and they’re half-asleep,’’ said Sylvia, who is 28.

The new federal help is designed to ease those fears. By retracing the twists and turns of the opioid trail — from Fall River, to Providence, and on to the Southern border — investigators hope to piece together the pipeline and attack the source.

Kennedy, whose district includes Fall River, said the effort gained serious momentum after Racine and other law-enforcement leaders in the county met several months ago. “There is no doubt about the need for these additional resources,’’ the representative said.

Racine, the Fall River police chief, welcomes the assistance. The problem is too big, too complicated, and its masterminds too distant for police in this city to overcome on their own. Treatment is needed to curb demand, Racine said, but law enforcement remains essential to cut supply.

In addition to the federal aid, Fall River has been given more state help.

The city will receive $85,000 a year for the next five years under a program to fight prescription-drug abuse. Another state initiative is funneling $70,000 to Fall River to develop strategies to fight opioid deaths and overdoses.

Better days are ahead, the chief predicted.

“We have to be at a tipping point,’’ said Racine, who lost his best friend to a heroin overdose. “Too many people are dying, and too many families are experiencing the heartache.’’

The mayor, barely into his first term, also sees a brighter future.

Brian MacQuarrie can be reached at brian.macquarrie-@globe.com.

PREVIOUS ARTICLE
Article 38 of 100
NEXT ARTICLE