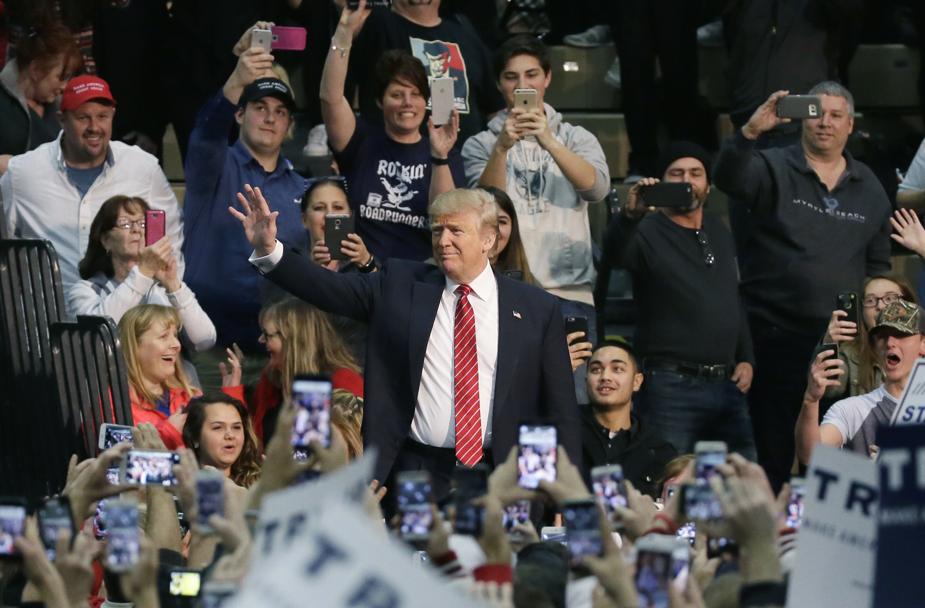 Hassan Qazwini said not only Muslims should feel alarmed.Donald Trump stirred thousands on Friday in Warren with criticism of protesters and talk of blocking immigrants and torturing Islamic State members. (Brittany Greeson for The Boston GlobeCarlos Osorio/Associated Press) 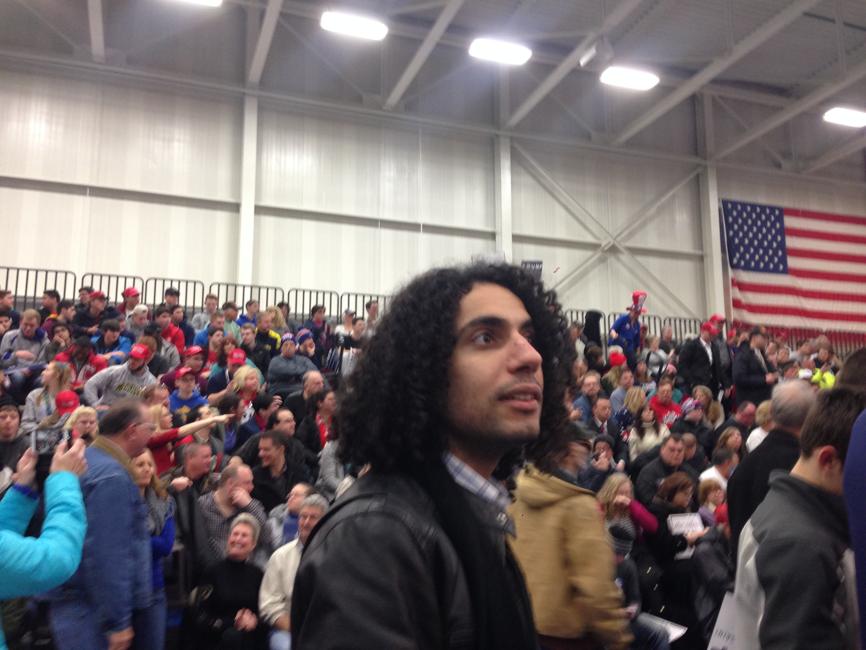 DEARBORN, Mich. — The imam’s words poured out in slow, deliberate English, his message as clear as the crystal chandelier hanging from the ceiling of the green-domed mosque.

Vote, he told the congregation populated mostly by Iraqi Muslims. It is their “moral duty’’ to be heard in Michigan’s presidential primary Tuesday, said the cleric during last Friday’s afternoon prayer service.

He did not specify for whom — other than “not a Republican,’’ least of all, Donald Trump.

The large Muslim community in this diverse Detroit suburb, home to Ford Motor Co. headquarters, has grown increasingly alarmed amid rising Islamophobia many here attribute to Trump’s divisive rhetoric. The GOP front-runner has called for a ban on Muslims entering the country, the surveillance and shuttering of mosques, and the registration of Muslims living in America.

Interviews in recent days with Muslim residents of Dearborn — and participants at a Trump rally a short distance away — showed the deep chasms and resentments that are fueling emotions in this presidential election. Trump has a lead in polls of Michigan Republican primary voters, and Muslims like Hassan Qazwini, the visiting imam at the Az-Zahra Islamic Center just outside Dearborn, are fearful about the message another victory for the businessman would send.

The 52-year-old cleric knows that his words, videotaped to be posted later on YouTube, will echo far beyond the 300 men and women kneeling before him on the plush red carpet. As leader of Dearborn’s Islamic Center of America, the largest mosque in the country, until last year, he has had an audience with Bill Clinton, George W. Bush, and Barack Obama. His opinions matter.

Qazwini compared Trump to Adolf Hitler and accused him of “brainwashing’’ people with “an agenda based on hatred and bigotry.’’

“Inshallah,’’ he said, using the Arabic term for “God willing,’’ “I hope the people of this country will heed this warning.’’

Earlier Friday, 18 miles away at a community college gym in Warren, Trump commanded the attention of thousands of cheering supporters. For 70 minutes straight, he delivered his usual broad-ranging stump speech, jeering at his opponents, bragging about his wealth, and — the crowd favorite — building The Wall along the Mexico border.

Women in flag tank tops danced in the bleachers and waved Trump signs. One voter held a large red mitten-shaped cutout of the state of Michigan with the words “Trump, this mitt loves you,’’ referencing former Massachusetts governor Mitt Romney’s recent denouncement of Trump. A shirtless man in a red tie mimed in the distance.

Ali Harb, a 26-year-old writer for the Arab American News in Dearborn who emigrated from Lebanon 10 years ago, drank in the raucous scene from the middle of the gym floor. Harb had come to his first Trump rally to see for himself how Trump whips up a crowd.

Harb cited a recent state poll that said 61 percent of Michigan Republicans supported Trump’s proposal to ban Muslims from entering the country. His Muslim friends have begun darkly joking whether internment camps would have hookah and Wi-Fi.

His newspaper has been the recipient of taunting tweets: “You, your religion, your national origins are EVIL. You don’t belong in this country.’’ Another said he wanted to go “target shooting’’ in Dearborn, home to the highest concentration of Arab Americans in the country — some of whom are Christian.

“Trump is a symptom. He’s not the cause of all of this,’’ Harb said. “He’s simply rallying the forces of hatred and giving them a mainstream American platform.’’

As Trump spoke, protester after protester was ejected from the rally — five rounds in all. Their causes? Unclear, for the boisterous crowd quickly drowned out each one by booing and chanting “USA! USA!’’

Trump commanded security to “Get ‘em outta here!’’ He ridiculed the protesters, calling one “meek,’’ another “stupid.’’ (The Detroit News later reported that one of the protesters escorted from the rally was a Muslim American who had shouted “Not all Muslims are terrorists!’’)

Trump pivoted seamlessly from protests to torture as he touched on the threat of the Islamic State. “They’re allowed to chop off the heads of people but we’re not allowed to waterboard?’’ he asked voters. They laughed.

In the crowd, 23-year-old Sean Staniec, who cleans ambulances for a living, said he agreed 100 percent with everything Trump says about Muslims. Having Muslims in the country, Staniec said, means “All they’re gonna do is find another World Trade Center and bomb it. There’s gonna be another Boston [Marathon bombing.]’’

David Girjis, 17, said he would vote for Trump because “He tells it like it is.’’ The high school senior attended the rally with about 70 students who had persuaded the principal to give them the day off.

Girjis said that he is friends with a couple of Muslims at school — “They are nice people’’ — but that a ban would be “the best thing for everyone right now, to keep us all safe.’’

Trump has also said Muslims should carry special identification cards and, as recently as Thursday’s GOP debate in Detroit, vowed that if elected president he would abandon the Geneva Convention and kill the wives and children of suspected terrorists.

(He appeared on Friday to back off his proposal to kill terrorists’ families, issuing a statement saying he would be bound by international laws.)

Harb, the journalist, said Muslims are the largest targets of the Islamic State, also known as ISIS. Harb’s old neighborhood in Beirut was hit by two ISIS suicide bombers in November, in which 43 people died — one day before the Paris attacks that elevated Trump’s vitriol.

“Seeing the bakery where you used to go and get bread every day just soaked in blood and then hearing Trump talk about Muslims, you see that wow, we’re actually getting victimized by both sides,’’ he said, “by the terrorists and the people who claim to want to fight the terrorists.’’

As their imam spoke on Friday, preschoolers cartwheeled freely and played “Duck Duck Goose’’ at the back of the mosque, next to women dressed in jeans and headscarves as well as those in full-length black abayas.

The children appeared free from the fear their parents say they are feeling, even here in Dearborn where Lebanese restaurants, hookah lounges, and Middle Eastern pastry shops line strip malls.

“There’s a sense of more hate overall. It makes me afraid for my children,’’ said Maya Mortada, 29, a pediatric nurse practitioner.

Congregants recounted an incident at a Kroger grocery store in Dearborn last year when an Arab-American Muslim man was assaulted by two white men, calling his family terrorists.

Haidar Al-Saadi, a 34-year-old emergency room doctor and father of three, blamed Trump for creating a climate that’s even worse than what Muslim Americans experienced following the Sept 11 terror attacks.

“People came to the US because it’s the land of the free,’’ Saadi said. “Now people are having second thoughts about traveling freely and being in certain places alone.’’

Dawud Walid, executive director of the Michigan chapter of the Council on American-Islamic Relations, attended Friday’s service with his 14-year-old son.

Walid, who is African-American and an imam himself, said mosques are organizing service activities around the state in hopes of changing the public’s attitudes about Islam — if not defeating Trump at the ballot box.

“Racism can’t be legislated away. It’s a disease of the psyche and matter of the heart,’’ Walid said. “Trump may not actually believe what he’s saying but he’s studied political trends. He’s a businessman and an actor, and he knows how to play the game.’’

PREVIOUS ARTICLE
Article 4 of 148
NEXT ARTICLE