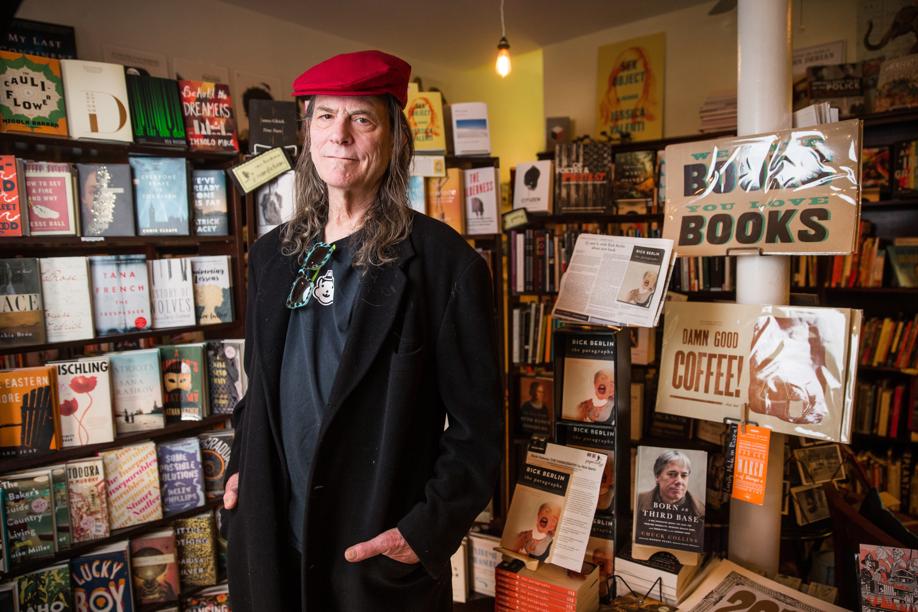 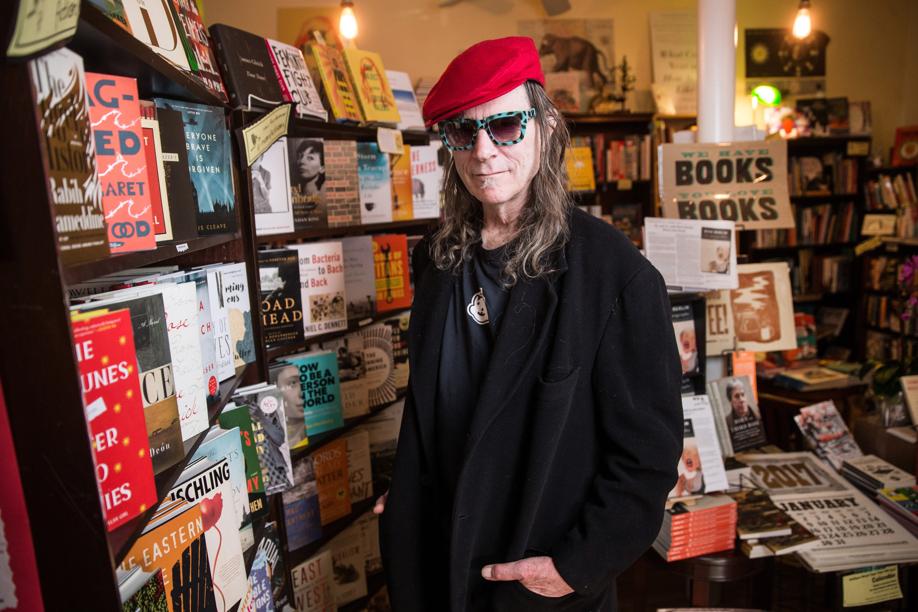 Rick Berlin’s “The Paragraphs,’’ is the flagship title for Cutlass Press. (Aram Boghosian for The Boston Globe)
By Joan Anderman
Globe Correspondent

It’s hard to imagine a more perfect literary union than the one between Rick Berlin and Cutlass Press.

Berlin, a queer legend on the Boston rock scene and unofficial mayor of Jamaica Plain, was sitting on 35 years of gonzo verbiage: vignettes spewed as lyric drills and diary entries and meditations on being alive. Cutlass Press was a twinkle in the eye of Kate Layte and Katie Eelman, the women who run Berlin’s neighborhood bookstore Papercuts J.P. and who dreamed of launching an in-house imprint to publish cutting-edge work. Last year, as Berlin was getting ready to self-publish a volume of his collected writings on Amazon, he stopped by the store on a lark and asked Eelman to give it a once-over. She knew they’d found their flagship title and shifted into high gear. Within months, Cutlass Press was off the ground, and in November it released Berlin’s memoir, “The Paragraphs.’’

“A memoir? I guess that’s the right word,’’ says Berlin over the squeal of a roommate’s guitar in his Hyde Square apartment. “It’s a nod to my family in some way, but that wasn’t intentional. I’ve been writing stuff for a long, long time. Now I guess people who think I’m weird will understand why.’’

Berlin is weird — a wildly colorful songwriter and fearless frontman who formed his first band, Orchestra Luna, in Boston in 1973. Through the decades and numerous brushes with the big time he has remained true to his kaleidoscopic vision, leading a slew of projects including Luna, Berlin Airlift, Rick Berlin The Movie, the Shelley Winters Project, and his current group, The Nickel & Dime Band. At 71, he is irrepressible, and smitten as ever with his life in music and in Jamaica Plain.

“It changes under your feet but it still has that thing,’’ Berlin says of his beloved neighborhood. “I’ve lived all over the country and this is the only place, including where I grew up, that feels like home. When the chips are down we take care of each other.’’

Berlin grew up in a series of large houses with sprawling lawns, the oldest of three children in an affluent, chaotic family. This reader is likely not the only one who struggles to picture him hobnobbing at the country club, but coming of age in dysfunctional splendor formed him. It’s where Berlin learned, by example, what he didn’t want to be.

“My mother was a tough Yankee who held everything on her shoulders,’’ Berlin says, “and my father was ‘The Man in the Gray Flannel Suit.’ He hated his job. He should have been an artist.’’ Berlin writes unflinchingly and with enormous heart about his family, along with acid trips, body parts, cats, music, sex, love, philosophy, and the vagaries of aging, to name a few printable topics. A compassionate nonconformist, he alerted all sensitive parties — “Don’t read the dirty parts!’’ —­ and demurred when Doyle’s wanted to sell their star waiter’s book in the restaurant. Aside from a couple of structural suggestions, Cutlass Press left Berlin’s profane, incandescent prose unchanged.

“We’re focused on work that is dynamic, entertaining, unique, and subversive, and Rick’s book is all of that,’’ explains editor in chief Eelman. “I am constantly astounded by his originality.’’

Cheerful disregard for the status quo is the through line in Berlin’s world. He came late to music, after declining not one but two full scholarships to graduate programs at his alma mater Yale (architecture and drama), quitting both of the establishment gigs he tried (teacher and designer), and rejections from both the Army and the Peace Corps. Once he started writing songs in his late 20s, everything clicked into place.

“It wasn’t so much a choice, it just kept being the thing I did,’’ says Berlin, who estimates he’s written more than a thousand songs, many of them image-rich portraits of people and places that have earned him comparisons to Tom Waits and Leonard Cohen. “I love all of it, recording, performing, loading in, loading out, rehearsing. It’s obviously not about money or fame. Artists matter. I think it’s because we see and can name things that people find confusing or hard to touch.’’

Berlin will read, sign books, and play a set of songs on Sunday at Tres Gatos in J.P. as part of a short promotional tour that includes stops at Porter Square Books and the Savoy Bookshop in Westerly, Conn. As more independent bookstores express interest in carrying “The Paragraphs,’’ which is currently the top seller at Papercuts J.P., Cutlass Press hopes to send him out on a larger tour. Berlin, meanwhile, is finishing work on a new Nickel & Dime Band record called “The Courage of the Lonely’’ and will throw his hat into the ring once more, with feeling.

“I’d like to find a label. I don’t know where we fit in and I don’t expect a dime, but I’d like to find somebody that loves it,’’ he says. “My big hope is that somehow the book and record can meet somewhere, and rise.’’

Joan Anderman is a freelance writer. She can be reached at Jcanderman@gmail.com.

PREVIOUS ARTICLE
Article 139 of 155
NEXT ARTICLE