Destination casinos are a catalyst for development
PREVIOUS IMAGE 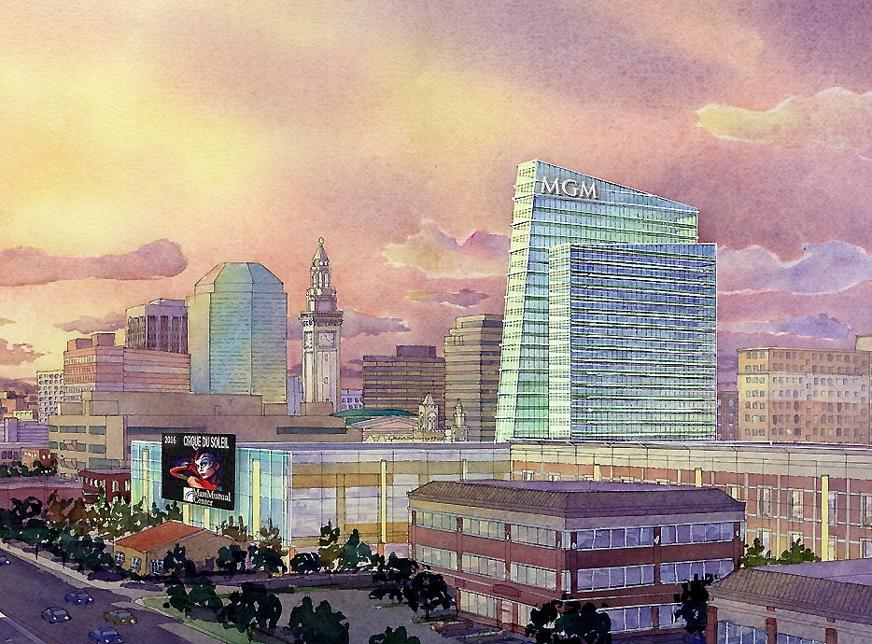 Rendering of the casino complex in Springfield.
By Stephen Crosby

When the Legislature and Governor Patrick legalized casino gambling in 2011, they developed a strategy to expand the usual benefits of casinos: Rather than simply promoting jobs and revenue, the casino legislation in Massachusetts prescribed “destination resort casinos,’’ designed to also produce broad-based economic development.

This strategy is essentially unique to Massachusetts, and it was, frankly, somewhat of a calculated risk. Typically, casino developments across the country have not resulted in broad-based economic development, although they often have provided the benefits of jobs and revenue. Our casino legislation proposed an audacious strategy: a clarion call for additional amenities in the gaming establishment; criteria for integration with other economic drivers in the region; a very high minimum capital investment requirement (assuring large construction projects and quality facilities); and a mid-range tax rate (25 percent of gross gaming revenue), to hopefully provide the economic and policy tools to support broad-based economic development. The Commission’s recent visit to Springfield demonstrated that the commitment to this strategy is working. Springfield officials reported an increase in economic development-related investments of 16.4 percent since December 2014, part of an estimated $3.307 billion in total investment since the devastating 2011 tornado tore through the city.

Due also in part to the aggressive solicitation of competition by Springfield mayor Domenic Sarno and Chief Development Officer Kevin Kennedy, the MGM Springfield project goes far beyond the standard casino proposal. The MGM plan promises a comprehensive mixed-use development project, which includes not only a casino, a four-star hotel, and restaurants, but also extensive retail, a movie theater, a bowling alley, an outdoor ice skating rink, a seasonal public market, and 54 units of market-rate housing. The MGM Springfield proposal is boldly attempting comprehensive mixed-use development anchored by casino economics, a concept unmatched by any other casino in the country.

Even casino skeptics have noted and admired the MGM Springfield proposal. Until recently, that proposal has existed only in the form of promises and renderings; now the renderings are giving way to reality. Deep cement foundations, steel structures, and prefab concrete walls are arising, Phoenix-like, in Springfield’s South End site, previously the site of decay and tornado destruction.

But greater even than the metamorphosis of renderings to the reality of steel and concrete, MGM Springfield seems to be galvanizing a broad sense of “Springfield Rising.’’ Projects that may not have been possible without the casino, or that could have been mere one-off initiatives, like the Chinese railroad car assembly plant or the renovation of Union Station, have merged with MGM Springfield to attract other economic development, including a new innovation center, a cultural district, and a regional bike-share program. Holyoke Community College’s Center for Hospitality and Culinary Arts has been established in Holyoke. New developers are eying locations around the city.

But perhaps most instructive is the business community’s rallying to replace the Springfield minor-league hockey team. When the Springfield Falcons chose to leave town, within months, 22 local business people, working with the mayor and MGM, bought the Portland Pirates, prevailed upon the American Hockey League to relocate the team to Springfield, and rechristened them the Springfield Thunderbirds. This kind of community action and collaboration can only happen in a city where optimism and confidence in the economic future are in play. This sense of hope and optimism are clearly palpable in Springfield and many of its neighboring communities.

The Wynn Boston Harbor project in Everett, while at an earlier stage of development, has shown similar optimistic signs of broad-based economic development, due in part to the sheer magnitude of the project. Wynn’s full project cost of $2.1 billion makes it the largest single-phase development in the history of Massachusetts. As Mayor Carlo DeMaria recently testified at a Gaming Commission meeting, “As we all know, the Wynn Resort is at the center of Everett’s environmental and economic revitalization. Everett was recently named one of the top 10 places to live in the Commonwealth. Our commercial and residential property values are on the rise, and our waterfront is being restored as a wonderful natural resource and recreational asset for our residents. With a new harbor walk, we realize a once-in-a-lifetime opportunity to open a waterfront that’s been fenced off for more than a century and then invite all our residents and neighbors and guests to enjoy it for generations to come.’’

Can a destination resort casino serve as a major economic catalyst for the rejuvenation of small post-industrial cities? The Legislature believed that it could, and the Gaming Commission is cautiously pleased to say that it is looking more and more like they were right.

Stephen Crosby is chairman of the Massachusetts Gaming Commission.

PREVIOUS ARTICLE
Article 29 of 139
NEXT ARTICLE