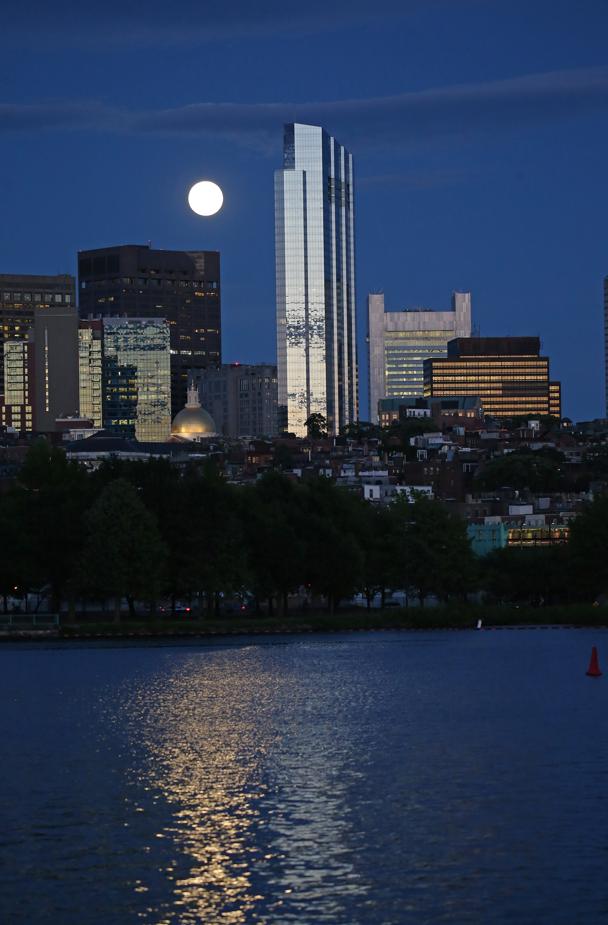 The Millennium Tower is a sleek new addition that looms above the growing Boston skyline. (David L. Ryan/Globe Staff) 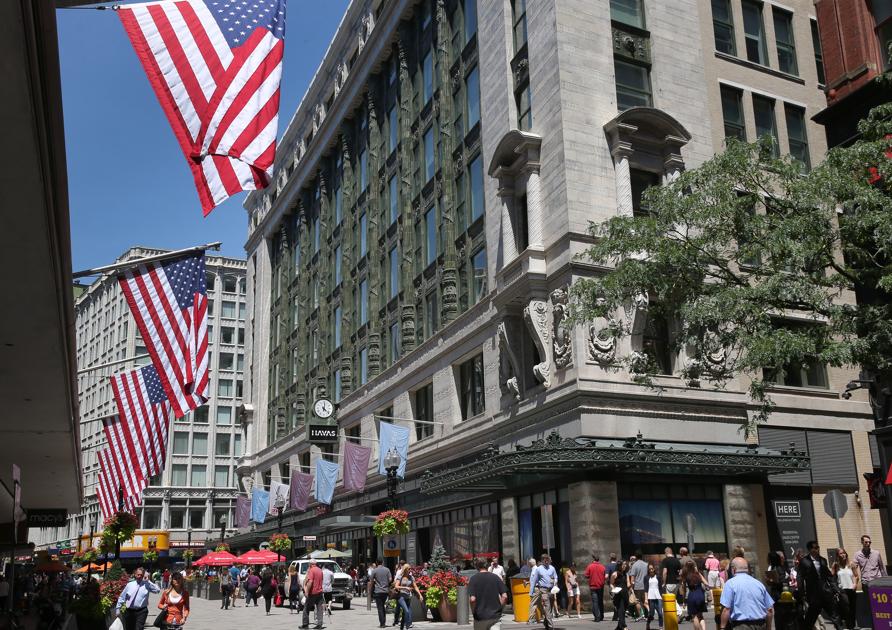 Clockwise from upper left, the distinctive facade of the old Filene’s building has been saved in the repurposed Burnham Building; the tower as seen from the corner of Washington and Summer streets; a view from a condominium on the 51st floor. The median price for a two-bedroom unit, according to the developer, is about $1.9 million. (Photos by David L. Ryan/Globe Staff) 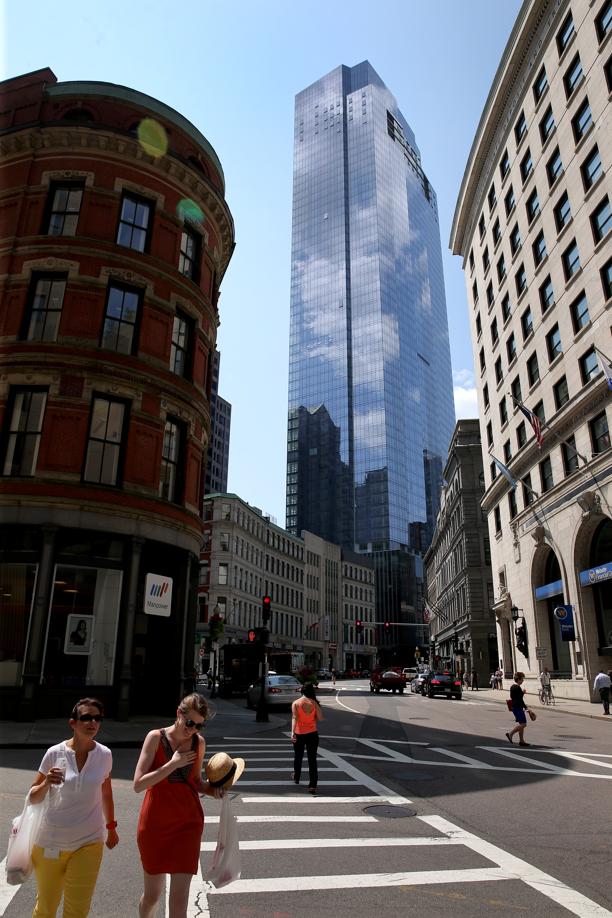 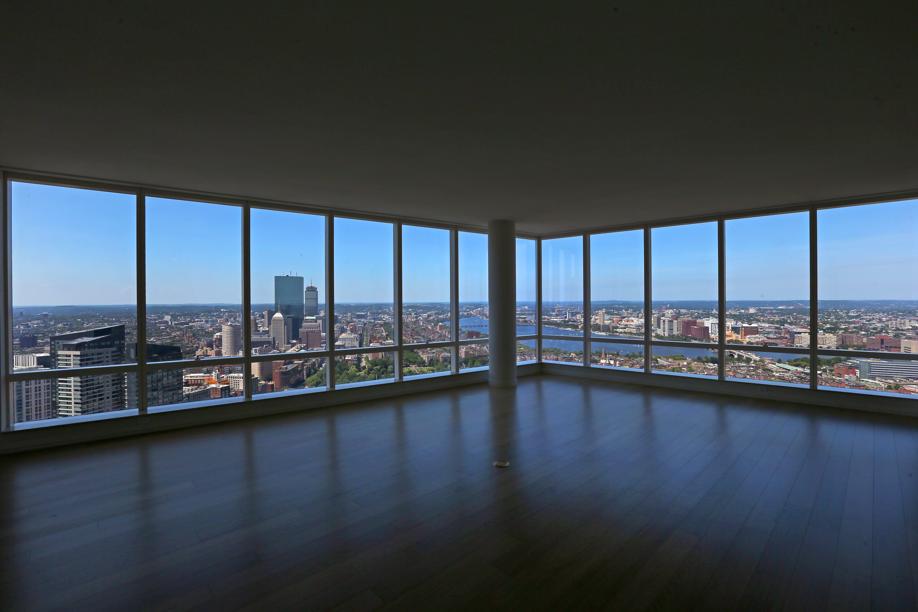 The new Millennium Tower at Downtown Crossing is the first arrival in what I hope will turn out to be a new generation of Boston skyscrapers. With construction almost finished and residents beginning to move in, it’s clear that the tower offers a lot of lessons about the right way to go about building in the city.

Millennium is big. It fills a whole block of Washington Street and rises 685 feet above the narrow byways of our old city. Viewed from afar, say from across the river in Cambridge, it commands the downtown skyline (for now anyway) like the tallest tree in the forest.

But the triumph of Millennium isn’t the long view. It’s exactly the opposite. It’s the fact that as you walk closer, the tower disappears. Unless you look carefully and crane your neck, you can’t find it.

What you’re aware of, instead, is an extremely lively stretch of streets and sidewalks. The Millennium Tower lurks like a wizard behind the scenes, pouring a fresh mix of condos, shops, and services onto a site that once was a beloved destination for shoppers but had deteriorated to the point where it was literally a hole in the ground. Architecture here does what architecture does best: It heals a wound in the city.

The guys who put Millennium Tower together are Boston developer Anthony Pangaro and architects Gary Handel and Blake Middleton of Handel Architects in New York. A couple of nearby buildings from the same team also have the word “millennium’’ in their names. It’s confusing and, well, pompous. The tower needs a nickname, so we’ll call this one “Millie.’’

A brief description. The skyscraper is 60 stories high and contains 442 condos of various sizes. The condos don’t begin until the sixth floor. For the first five stories, Millie is retail. Those five lower floors are wider than the tower above, as if they were wrapping it. They obscure your upward view of the tower, so that when you walk down the street — Washington is a pedestrian zone — you probably don’t notice it. (Numerous canopies also block your upward view.) Instead you see what appears to be a street of five-story buildings, about the height of older neighbors, that are gradually filling up with shops and services.

The tower — the third tallest in the city — is hiding. It isn’t overwhelming you with its size. But it’s that size that supplies Downtown Crossing with the presumably well-heeled inhabitants of the new condos.

You can measure Millie’s kind of excellence by comparing it with the Hancock Tower (now named 200 Clarendon), which opened in 1975 in Copley Square. The Hancock, designed by Henry Cobb of I.M. Pei & Partners, is a beautiful, world-class piece of architecture. But like many other buildings of its generation, it doesn’t participate in city life. It stands aloof on a barren plaza like an object displayed in a museum, isolated from everything around it. You could say that Millie mixes sociably with its neighbors while the Hancock suffers from a don’t-touch-me neurosis. One wants to be a great work of art; the other wants to share in the life of a great city.

Millie’s designers are hipped on a concept they call permeability. A permeable building, they say, is one where you can see from the sidewalk deep into the interior. Instead of a display window, you look at actual people indoors, working or shopping or schmoozing. The rule at Millie is that whatever is happening inside, even four or five stories up, must be apparent from the street.

Permeability leads to architecture that’s full of holes, windows you can look through and doors you can open. I’m reminded that Boston planners once did a study in which they decided that they could measure the social vitality of a neighborhood by counting the number of doorknobs. More doors, more life. At Millie, even shops on the fifth floor have their own front doors on the sidewalk.

There’s a lovely exception to all these good rules. One chunk of historic architecture survived on the site, a wing of the former Filene’s department store at the corner of Washington and Summer streets. Taking advantage of a tax break for preservation of landmarks, Millie’s designers restored what could be salvaged and rebuilt the rest. They replicated original details and materials, some of them now rare, such as terra cotta. They named the result — which connects with the base of the tower — the Burnham Building, after the noted Chicago architect who designed it in 1912. The handsome Burnham now stands again at Millie’s busiest corner, a fine building from another era that’s been saved and repurposed for contemporary shops and offices. It’s a visible reminder that the unembarrassed mix of new and old is part of Boston’s people and its history.

The condo tower rises from the midst of all this activity. Its glass skin is faceted into shallow planes that create a slightly tailored look, a kind of gentle pleating. The glass reflects the changing sky, the mullions are white, and together they create a tower with a pale, summer-like appearance. At times, Millie seems to rise and vanish into the upper air, although that may change when the condos are all occupied and furnished.

Condos at Millie come in many sizes. The median price for a two-bedroom unit, according to the developer, has been $1.92 million. But this is a case where you’d expect the median to be well below the average. So who knows.

A condo is sold as unfurnished space. It’s up to the new owners to create and fund their own interiors. There are rumors of some palatial indulgences, none yet confirmed that I know of. Lavish interiors, for better or worse, seem inevitable.

There’s also a collection of shared benefits for residents, what in real estate is called an “amenity package.’’ Among them are a swimming pool, a fitness center, and an owners’ lounge. The lounge is unforgettable, a cluster of tall linked spaces, with walls of book-matched marble and floors of dark wood. A row of squat flaming candles stands on a fire table, as if on an altar. You feel you should be on your knees, either to worship or to sing a campfire song. The lounge is a little bit kitsch, but it’s great kitsch.

It’s a minor gripe, but I’d rather have seen the fitness center a block or two down the street. You’d breathe outdoor air, mix a bit, maybe stop for coffee, get a little exercise (that’s the point of a fitness center, right?). You’d become a provider of street life, not merely a consumer. The city itself is the amenity package.

Another gripe: Millie doesn’t have an interesting top. The tower terminates its 60 stories with an attic space for mechanical utilities, a sort of janitor’s closet in the air. That’s common practice, but it’s a lost opportunity. The top of a tower can be a place for all kinds of expressive gestures.

Just beneath the attic there’s an opening that slices mysteriously across the facade. I was hoping for something dramatic up there, maybe a live-in flying monster out of Harry Potter, but the slice turns out to be only a row of nearly invisible inset terraces for penthouse condos.

Millie exemplifies a few precious truths. The urbanist Alex Krieger stated one: “A city is the place where the greatest number of activities takes place in the fewest number of square feet.’’

Because lots of different things are crammed close together, more kinds of experience are accessible. From Millie you can walk to the heart of the Theater District in maybe 10 minutes. If you dawdle.

Millie also reminds us of another truth, which is that the most important public spaces in a city are the streets. Streets are social and economic centers, not mere traffic ducts. Of any piece of architecture in a city, you need to ask how well it joins with other buildings, new and old, tall and short, rich and poor, in the collaborative work of shaping a good street.

Finally, I wonder who will be Millie’s new residents? Some will be local; some will arrive from other continents. Some — nobody knows how many — will already possess other dwellings and may see Millie as a mere pied-à-terre for a few weeks a year.

There’s currently a tower craze in the United States. Lavish publications run full-page ads about the joys of living high, ads in which one or two people, alone in evening clothes, often seem to do little but look out through floor-to-ceiling glass at some vast expanse of urban towers. Are there really such people? Is this love of the city, or the desire to be isolated from it?

Whatever those unknowns, some truths remain. Good cities are made of good streets. The Millennium Tower has figured that one out.

Robert Campbell, the Globe’s architecture critic, can be reached at camglobe@aol.com.

PREVIOUS ARTICLE
Article 16 of 220
NEXT ARTICLE