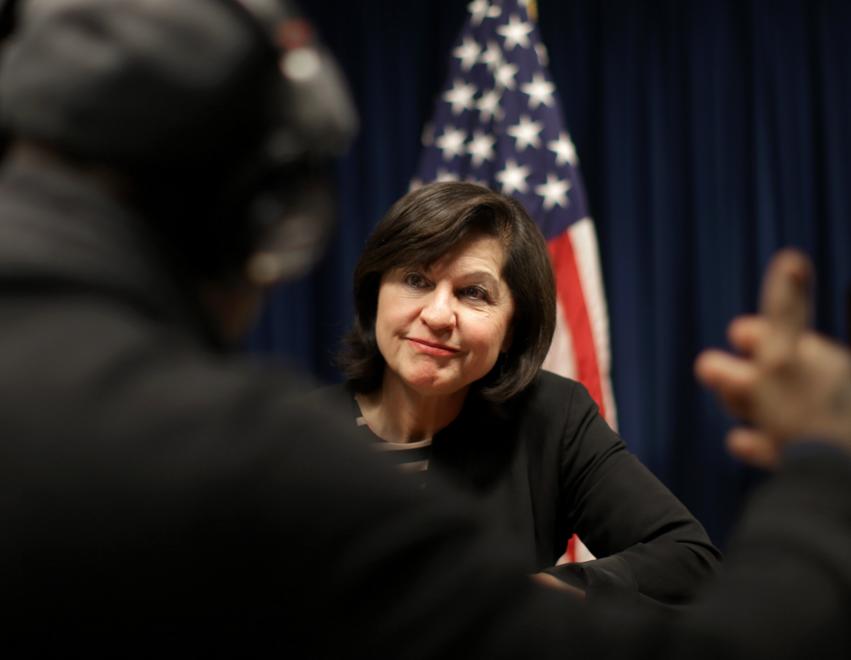 If your name is Bill Weld, Chris Christie, or Rudy Giuliani, zealous prosecution triggers accolades for bravery and a successful political career.

If your name is Carmen Ortiz, doing your job as a federal prosecutor instead can mean portrayal as a vengeful Cruella de Vil. Such disparity in perception is something to think about as Ortiz exits after seven years as US attorney in Boston. (Friday was her last day.)

The portraits of 53 men — going back in time to 1789 — stretch along the ninth-floor walls of the John Joseph Moakley Courthouse in Boston. When the portrait of Ortiz goes up, it will depict the first woman and Latina to hold the job of top federal prosecutor in Massachusetts. Putting aside such history, Ortiz has a successful record by any prosecutorial standard.

Her most controversial case involved the prosecution of Aaron Swartz, a troubled 26-year-old prodigy who broke into a closet at MIT and downloaded nearly 5 million academic articles from JSTOR, a for-pay digital library of academic journals. Ortiz indicted him under the Computer Fraud and Abuse Act, which carries a maximum penalty of more than 30 years in prison.

Swartz rejected a plea offer under which he would have served six months; while awaiting trial, he killed himself. His death sparked debate about free access to the Internet. It also led grieving relatives and friends — many with ties to Harvard and MIT — to blame Ortiz for Swartz’s death. That goes beyond ordinary cries of prosecutorial overreach, the default label if you don’t agree with the prosecutor or you like the defendant. In this case, Swartz’s defenders took no responsibility for casting him as martyr, making it hard for him to accept a plea without looking like he was caving on principle. By the way, the law under which Swartz was prosecuted still stands. If it is so unjust, shouldn’t it be changed?

If Ortiz riled Cambridge elites with her prosecution of Swartz, she also upset Beacon Hill’s political class. After a Boston Globe Spotlight investigation into patronage at the state Probation Department, she indicted former probation commissioner John J. O’Brien and two top deputies. A jury found them guilty of overseeing a rigged hiring system that, prosecutors successfully argued, amounted to a criminal enterprise. Those convictions were recently overturned by a federal appeals court, which ruled the actions taken by the state officials didn’t amount to a federal crime.

Giddy politicians viewed this as a huge loss for Ortiz. Yet a jury believed a crime was committed, even if the appeals court decided the behavior amounted to patronage business as usual. Ortiz has also come under fire for the extortion case she brought against two aides to Boston mayor Marty Walsh over allegations they forced organizers of a Boston music festival to hire union labor. Defenders say the aides were only “advocating’’ for union jobs, yet their advocacy allegedly involved threats to withhold permits.

After the US Supreme Court reversed the conviction of former Virginia governor Bob McDonnell on extortion charges, there’s pushback against political corruption cases. But that doesn’t mean Ortiz acted in bad faith any more than Weld did when he went after City Hall aides who worked for Mayor Kevin H. White back in the 1980s.

Weld, who failed to make a case against White, rode his prosecutorial zeal to the governorship of Massachusetts. Giuliani, who became mayor of New York City, and has run unsuccessfully for president, was just named cybersecurity advisor to President-elect Donald Trump. Christie, who also ran unsuccessfully for president, is now a very unpopular governor of New Jersey, with his own administration under scrutiny by prosecutors.

Their jobs as federal prosecutors cleared the way for careers in politics. They were toasted for their prosecutorial passion, while Ortiz gets roasted. Have times changed, or just the face of the prosecutor?

PREVIOUS ARTICLE
Article 30 of 139
NEXT ARTICLE