A tree finally succumbs to disease, leaving a hole in a neighborhood
The grand old elm was born with the Back Bay and grew up to grace it. Desperate rescue measures finally came to an end last week. Survivors include a century of memories.
PREVIOUS IMAGE 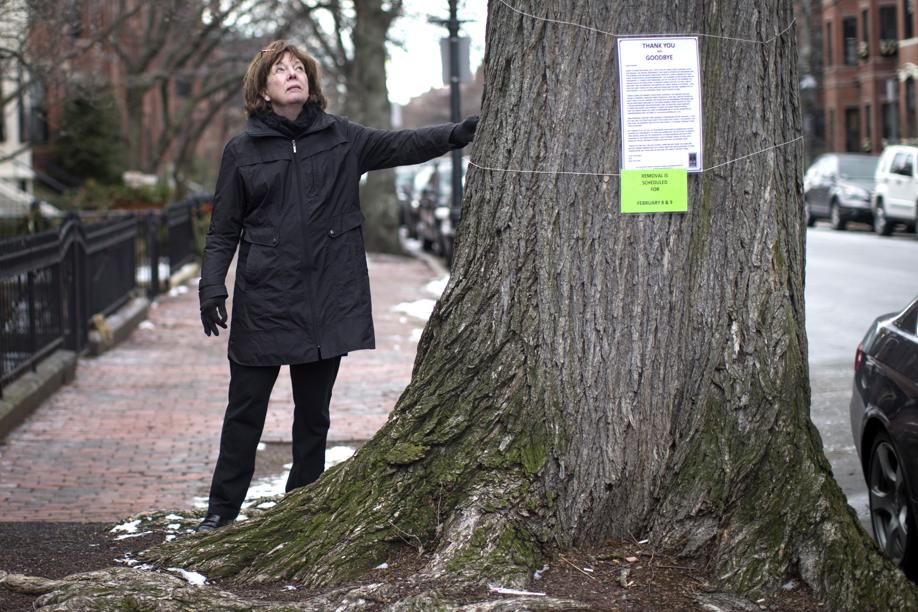 The stately, diseased elm (above) on Marlborough Street in the Back Bay, planted in the 1880s, was cut down last week. At right, in a photo taken in the 1870s, elm saplings are seen in front of a home on Marlborough Street.Margaret Pokorny (above) was one of many local residents who raised funds to help keep the tree alive. At left, the larger branches of the tree were hauled away for reuse. Below left, a mail carrier walked along Marlborough Street just a short time after the tree was felled. At bottom, a thank you note to friends, signed by BOE — Big Old Elm. (Boston AthenaeumKEITH BEDFORD/GLOBE STAFFKeith Bedford/Globe Staff) 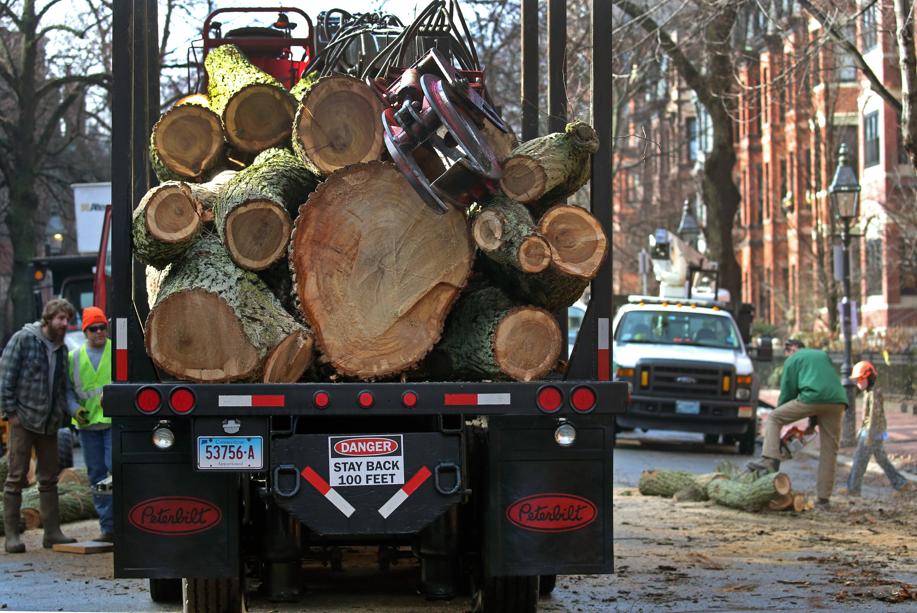 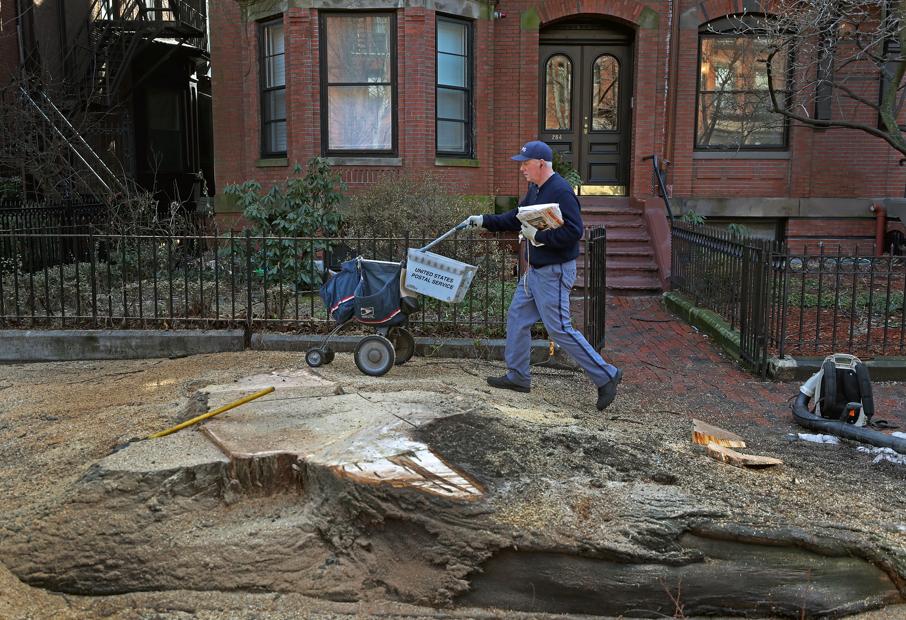 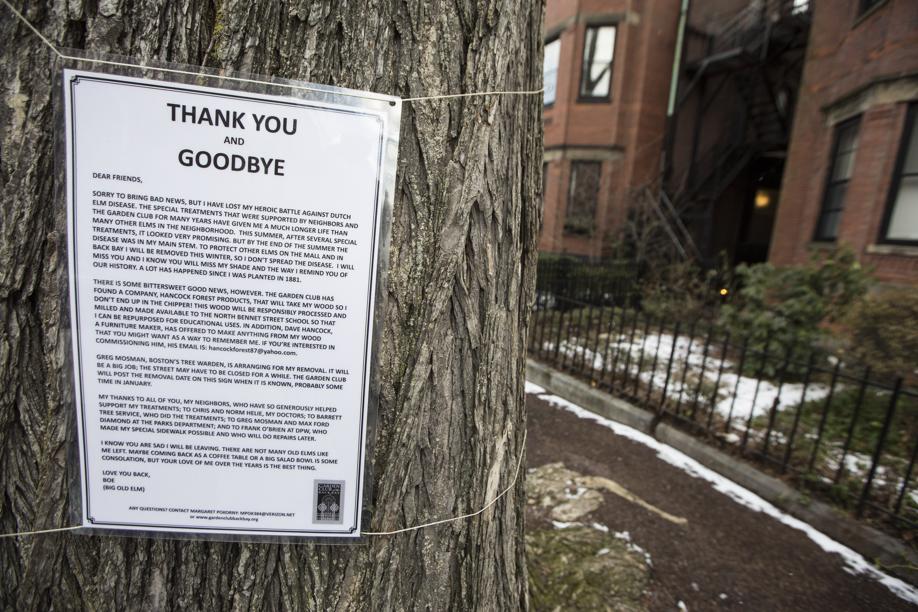 It arrived as a sapling when the Back Bay was in its infancy, a spindly American elm tamped down into a square of dirt cut into the brick sidewalk of 1880s Marlborough Street, no higher than the first bay window of the new brownstone behind it.

It survived air pollution and dog urine and crumpled papers, the nibbling of the horses that pulled the carriages and dragged the streetcars, too. It outlasted their hoofbeats and the trolley tracks that ran down Marlborough and even the paving stones in which those tracks were laid, fanning out over the generations of automobiles that followed.

The elm, known to neighbors in recent years as the BOE, or Big Old Elm, grew tall and it grew strong, tapering in and out again like a seven-story wine glass, its long limbs arching high above the rooftops, its broad leaves shading the sidewalk from the summer sun and turning golden in the fall.

Standing before 284 Marlborough St., just west of Fairfield, the elm’s trunk was so substantial that the children who sometimes hugged it on the way to school could not come close to wrapping their arms around it. And its roots stretched out with a certain grace, unfurling atop the granite edge of the curb in both directions without ever spilling over, turning back instead as if enveloping the south side of Marlborough in an embrace.

When city forester William Doogue gave out thousands of trees like it in the 1880s and ’90s, for home­owners to plant themselves, the Back Bay was a brand-new and largely tree-less neighborhood; 284 Marlborough, built in 1872, was among the first residences on its block, part of a set of five connected row-houses. Officials hoped that in time residential Boston might gain some of the arboreal beauty of New Haven, the fabled Elm City. It was a break from the past, when public trees were planted primarily in parks and malls, the “breathing spaces’’ of the industrial city. And it was a gift to the future, too, a strong American elm that could live 250 or 300 years.

Then came the ravages of the elm-bark beetle, first spotted by an entomologist in Harvard Yard in 1909, and the even greater threat of Dutch elm disease, which struck Cleveland in 1930 and reached southern New England a few years later. By 1950, the disease was killing 800 trees a year in Boston’s outer neighborhoods. In the 1960s, it advanced downtown, decimating the perfect columns of elms along the Commonwealth Avenue Mall and afflicting many of the street trees in the surrounding neighborhood, too.

Yet this elm endured, through luck and steady investments in fungicide and pruning by an admiring neighbor and the Garden Club of the Back Bay. Then, seven years ago, a modern problem emerged: buckling sidewalk bricks above the roots, pitting the elm against the Americans with Disabilities Act. For a time, it seemed doomed — until neighbors and the city devised a creative solution, replacing the bricks with a special type of pliable asphalt. Friends of the elm exhaled, daring to hope that it might live 50 more years.

And then Norm Helie, a Leicester plant and soil scientist who has worked since 2012 to try to stave off Dutch elm disease on the Commonwealth Mall, went for a walk in 2015 and noticed something amiss. He already knew this tree, of course: “a magnificent specimen of an American elm,’’ one of just a few that had survived on Back Bay sidewalks. (Another 100 of the original 600 on the roomier Commonwealth Mall have endured, too.)

Some of the branches were drooping, their leaves starting to yellow. Helie hoped these might be temporary symptoms of drought, which hits older, larger trees hardest, taxing their ability to circulate water and nutrients to outer limbs. He offered it a quart of water, but the tree was “hydrophobic,’’ and the water ran off onto the pavement instead of soaking down into the roots. Not good, Helie thought, worrying that tiny beetles were consuming those drooping branches from beneath the bark, and that those beetles might be spreading Dutch elm disease, a fungus that blocks the tree’s circulation.

Hoping to save the elm, he tracked down Margaret Pokorny, a Marlborough Street resident on the board of both the Friends of the Public Garden, which spends $140,000 a year to maintain the Commonwealth Mall trees, and the Garden Club of the Back Bay, which tends all other street trees in the neighborhood, extending the budget and reach of the city’s parks department.

Helie, who works alongside his wife, Chris, an entomologist, had grown skeptical of textbook treatments (fungicide injections, insecticide sprayings, and the immediate cutting of infected branches or trees) to combat Dutch elm, having watched them at times add stress to trees or spread the fungus more quickly. He wanted to strengthen the tree’s ability to fight off illness by improving its circulation system with selective pruning, fertilizer, and soil conditioners to slow the evaporation of water and encourage its absorption.

That would take money. Pokorny drafted a letter, channeling the voice of the tree. “HELP,’’ she wrote, explaining the need in a note she signed with love from “BOE (Big Old Elm).’’ She laminated it and hung it on the elm. She wasn’t sure what to expect, but the checks started to pour in: $5, $100, even $2,500, some accompanied by odes to the tree. They quickly raised the necessary $5,000, and Helie nursed and coaxed the tree all season, thinking, “I got this.’’ By the end of summer, the elm could drink 25 gallons at once.

Pokorny hung another letter in the voice of BOE, thanking the community while noting, too, that no cure existed beyond continual care, which would cost more money.

The leaves turned and fell to the ground, as they had every autumn since the 19th century; at the end of winter, buds emerged, bringing new leaves again last spring. In April, Helie revisited the tree.

“My heart dropped,’’ he said. Branches and leaves all over the crown were now drooping and yellowed, signaling that the disease had spread to the trunk and back out again, incurably afflicted. He e-mailed Pokorny. “Bad and sad news,’’ he wrote. The tree would have come to down, though they would wait until the next winter, when the beetles (“fair-weather fliers,’’ Helie said) would not scatter during cutting, infecting other trees.

“It’s heartbreaking,’’ said Pokorny, who has lived in the Back Bay since the late 1970s, drawn by the leafiness as well as the stately architecture. Not long after she arrived, Stella Trafford — “the grand dame of Boston parks,’’ and the force of nature who spearheaded the original Back Bay fight against Dutch elm disease — spotted Pokorny watering a street tree and enlisted her in the wider effort.

Now Pokorny thought of all that the tree had witnessed, a living link to the first years after the neighborhood was filled and developed, straddling the Back Bay’s long arc from Brahmin enclave to scruffy rooming-house district to burnished jewel again. She hesitated to write one last letter, determined to find a home for the wood first.

“It was really important to me that this not be run through a chipper or burned someplace or wasted,’’ Pokorny said. She reached out to the North Bennet Street School, the craftsmanship training program in the North End. But they all said the same thing, they lacked the capacity to convert the logs to lumber or store that much wood.

Then she connected with Dave Hancock, a Woodstock, Conn., tree buff who was already running his own sawmill and logging business when he enrolled in North Bennet’s cabinetry and furniture program in 2009. Larger lumber companies have little interest in street trees, which can have staples or nails embedded in them, making them time-consuming and costly to mill. But Hancock cringed at the thought of a stately elm becoming mulch.

He agreed to rent a heavy-duty flatbed and cover the cost of hauling the wood away. He promised to cut and kiln-dry it, to bring North Bennet students out for a workshop and donate some of the lumber to the school; the rest he will craft into bowls and tabletops, cutting boards and trim, taking commissions from fans of the tree.

Last month, Pokorny sat down and drafted one last letter from BOE. “Dear Friends,’’ she began, under the heading “THANK YOU and GOODBYE.’’ She described the battle against Dutch elm disease and the need to remove the tree, to protect its kin on the Mall.

“I will miss you and know you will miss my shade and the way I remind you of our history. A lot has happened since I was planted,’’ she wrote, grateful for the generosity of all who had donated. She added the coda about Hancock, including his e-mail address for anyone interested in commissions.

“I know you are sad I will be leaving. There are not many old elms like me left. Maybe coming back as a coffee table or a big salad bowl is some consolation, but your love of me over the years is the best thing.’’

And then last Wednesday, it was time, a black-ice morning that began at sunrise with a city crew salting a stretch of Marlborough Street emptied of cars. A bucket truck arrived at 8, and a crane followed close behind.

Ninety-foot-tall trees in National Register neighborhoods do not come crashing down with a crosscut saw and a cry of “timber!’’ Rising 65 feet in the bucket, Jeffrey MacMullen of North-Eastern Tree Service followed a methodical plan of “strap ’em high, cut ’em low,’’ securing branches to the crane with ropes and carving them off with a chain saw, working his way down over two hours, the crane lowering 3,000 pounds of wood at a time into a landing zone clear of gas lamps and fire hydrants.

On the pavement, half a dozen workers buzzed about in goggles and hard hats, feeding skinnier branches into a chipper, loading giant logs onto Hancock’s truck, gathering sawdust into a neat pile with a leafblower.

By late morning, nothing remained but a stump, four feet across and shaped, of all things, like a maple leaf. “Nice piece of wood,’’ MacMullen said. “Beautiful,’’ said Max Ford-Diamond, a city arborist; he thought about the 100 young trees it would take to trap the same amount of carbon as this massive elm. Helie bent down to try counting the rings, but sawdust and striations — abstract swirls left by decades of fungicide injections — made it a challenge.

Then came the stump-grinding team, and hours of gnashing at the base of the tree with a four-wheeled beast, kicking up woodchips and occasional sparks from the granite. They were gone by nightfall, leaving only a patch for the Public Works Department to fill, a hole in the sidewalk and the neighborhood.

Laura Crimaldi of the Globe staff contributed to this report. Eric Moskowitz can be reached at eric.moskowitz@globe.com. Follow him on Twitter @GlobeMoskowitz.

PREVIOUS ARTICLE
Article 38 of 236
NEXT ARTICLE