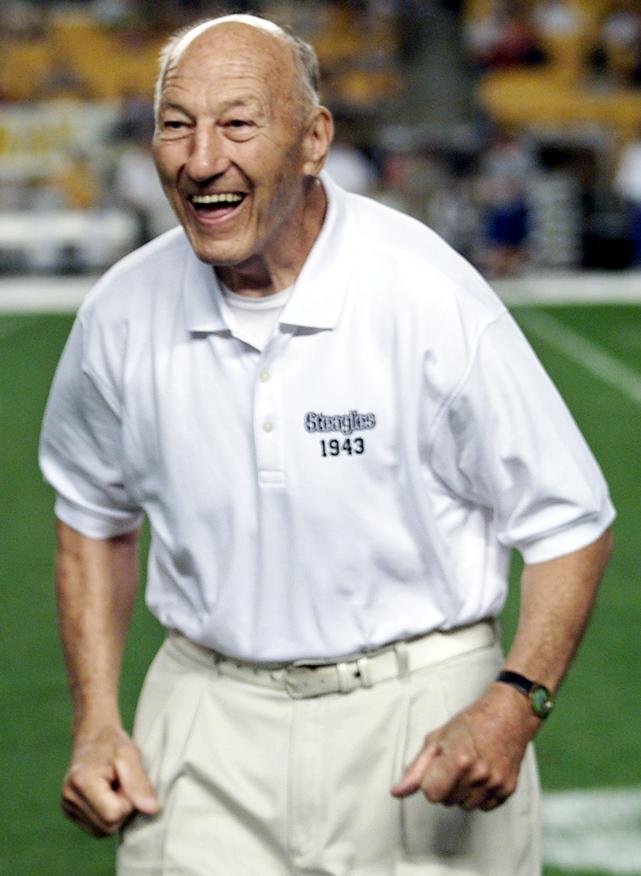 NEW YORK — Al Wistert, a star tackle for Philadelphia Eagles teams that won two consecutive NFL championship games by shutouts in the late 1940s and the last survivor of the three Wistert brothers inducted into the College Football Hall of Fame, died Thursday in Grants Pass, Oren. He was 95.

His death was confirmed by his daughter Kathryn Wistert.

Mr. Wistert was often outweighed by the man across the line of scrimmage in his nine NFL seasons, all with the Eagles. But he was not known as Ox for nothing. He mowed down opponents on offense and defense and covered punts and kickoffs as well.

He was named a first-team All-Pro six times by major national news agencies and was considered one of the finest players to miss out on election to the Pro Football Hall in Canton, Ohio.

Al Wistert and his brothers Francis, known as Whitey, and Alvin were all-American tackles at the University of Michigan, which has retired the No. 11 worn by each of them.

Al was a modest 6 feet 1 inches and weighed about 215 pounds, but his blocks sprang the Eagles’ future Hall of Fame running back Steve Van Buren on long gains, and he was tenacious and mobile on defense.

Mr. Wistert’s Eagles, coached by Earle Neale, known as Greasy, went to three straight NFL championship games. They were beaten by the Chicago Cardinals, 28-21, in 1947 at Comiskey Park, then defeated the Cardinals, 7-0, in a snowstorm at Philadelphia’s Shibe Park the following year and repeated as champions with a 14-0 triumph over the Rams on a muddy Los Angeles Memorial Coliseum field. The 1948 and ’49 Eagles teams are the only NFL squads to have won consecutive league championships by shutouts.

“We wanted to get those shutouts because whenever we shut out an opponent, we’d get a free dinner at Old Bookbinder’s,’’ Mr. Wistert told The Bucks County Courier Times in 2008, referring to the Philadelphia seafood restaurant Old Original Bookbinder’s.

In a 1993 letter to the board of selectors of the Pro Football Hall of Fame, George Savitsky, an Eagles tackle on their 1948 and ’49 championship teams after an all-American career at Penn, wrote, as related in Ray Didinger and Robert S. Lyons’ “The Eagles Encyclopedia’’ (2005), that Mr. Wistert “should have been inducted many years ago.’’

“How could he be overlooked?’’ Savitsky wondered.

Albert Alexander Wistert was born on Dec. 28, 1920, in Chicago, a son of Lithuanian immigrants. When he was young, his father, Kazimer, a Chicago police sergeant, died of complications of wounds suffered when he was shot during a holdup.

Al’s brother Francis played tackle on two unbeaten Michigan teams in the early 1930s. Al starred at Michigan from 1940 to 1942. His brother Alvin made his Michigan debut at age 31 after service with the Marines in World War II and played for undefeated Wolverine teams in 1947 and ’48.

Al Wistert, the only Wistert brother to play in the NFL, was selected by the Eagles in the fifth round of the 1943 draft, but spent his rookie season with a hybrid team known as the Steagles, essentially an Eagles team with some players from the Pittsburgh Steelers, both having lost many athletes to military service.

In addition to his daughter Kathryn, he leaves his daughters Pamela Avila and Dianna Rorabacher, three grandchildren, and three great-grandchildren. His wife, Ellie, died in 2004.

PREVIOUS ARTICLE
Article 69 of 148
NEXT ARTICLE