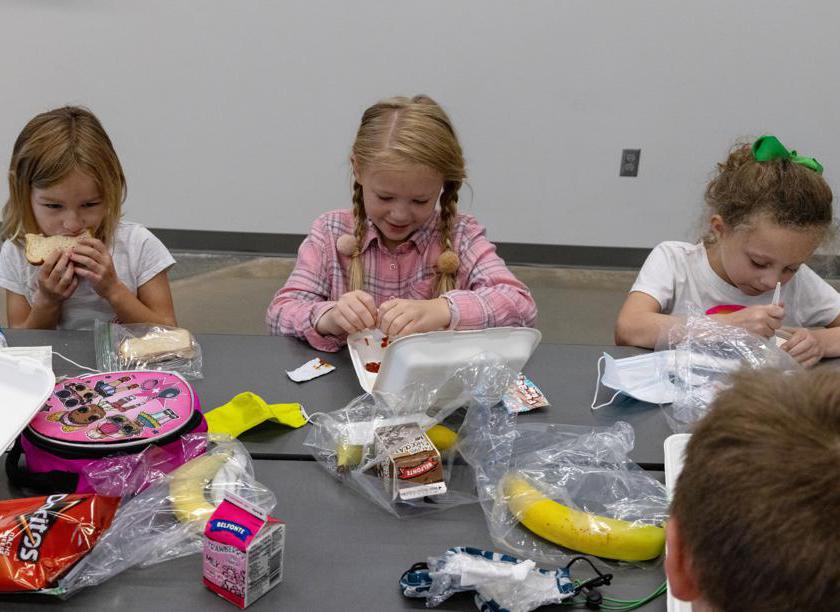 Students ate lunch in Kansas City, Mo., where the school district has had to make supply runs because of shortages.
PREVIOUS IMAGE

WASHINGTON — School officials in a Missouri city have been making twice-weekly runs to Sam’s Club to stock up on frozen pizzas and hot dogs. A Kansas school district ran out of vegetables for two days last month. And a district in St. Paul, Minn., has an emergency supply of frozen grilled cheese sandwiches in case it runs out of all other food.

Schools across the country are facing shortages of cafeteria staples like chicken, bread, apple juice, and even plastic cutlery, as supply chain woes and a lack of truck drivers complicate the most basic task of feeding students.

Officials say they are scrambling to provide meals for students — many of whom rely on the food they eat at school as a significant, and sometimes the only, source of daily nutrition. Many educators say they expect supply-chain issues will only worsen in the coming months.

The issue stems from a confluence of events, much of it tied to the pandemic. Labor shortages have rocked food distributors and manufacturers, who say they do not have enough people to drive trucks, pull products from warehouses, or work assembly lines. The virus has exacerbated the country’s shortage of truck drivers, and companies say they do not foresee enough young drivers applying to replace those aging out of the workforce.

Jenna Knuth, the director of food and nutrition services at North Kansas City Schools in Missouri, grew worried that she would not have enough food to feed all 21,500 students in her district after three big food distributors said they would stop delivering supplies. So Knuth’s staff members are making regular trips to the local Sam’s Club and Restaurant Depot stores, where they clear out the frozen pizzas, tater tots, and hot dogs.

Many of the products they buy at the wholesale stores do not meet federal nutritional guidelines, Knuth said, adding that while the food is not unhealthy, it contains higher levels of sodium and fat than the products the district would usually purchase.

“We’re bringing in whatever food we can,’’ Knuth said. She is now “begging’’ local distributors and suppliers for contracts.

Since the start of the pandemic, the Agriculture Department has issued a slate of waivers giving schools more flexibility to meet federal nutritional guidelines. On Sept. 15, the department issued a new waiver preventing school meal programs from being financially penalized if they fail to meet the guidelines because of supply-chain issues. It has also increased the rate it will reimburse schools for the cost of food products.

“We know that districts are doing everything they can to put healthy, nutritious food on the plate for kids,’’ said Stacy Dean, the department’s deputy undersecretary for food, nutrition, and consumer services. “We want to support that effort and reassure them that no one is going to get in trouble because of an unexpected difficulty.’’

Beth Wallace, the president of the School Nutrition Association, said the group was asking federal officials to further increase the reimbursement rate and temporarily loosen requirements that certain products be American-made. According to a recent survey conducted by the association, 97 percent of school meal program directors reported having concerns about supply-chain disruptions.

Cindy Jones, the assistant director of food services at the Olathe School District in Kansas, said schools there ran out of vegetables for two days last month after a delivery was delayed. The district encouraged students to take extra fruit instead.

When delivery trucks do arrive, they often do not carry all of the food the district ordered, Jones said, adding that Olathe was receiving only about 65 percent of its orders.

The cost of food has also spiked as distributors pass on price increases. At times, the district does not know how much a delivery will cost until the truck pulls up to the dock, forcing the district to either accept whatever the price is or risk running out of food, Jones said.

“Of course, we’re going to take care of the kids, but that’s one of our worries,’’ she said. “If we don’t get enough reimbursement and funding to pay for these additional costs, what is that going to do for us down the road?’’