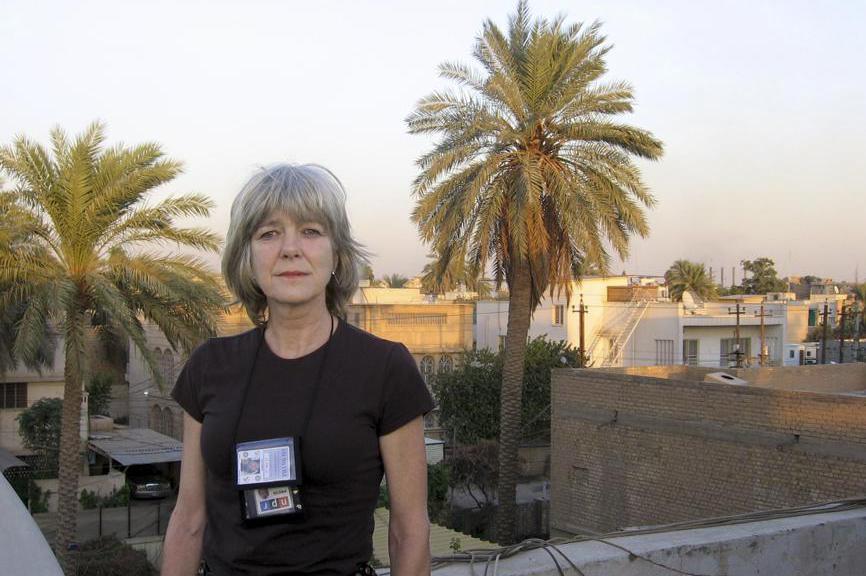 Ms. Garrels, shown in Iraq in 2006, worked at NPR for more than two decades.
PREVIOUS IMAGE

Anne Garrels, an international correspondent for NPR who reported from the front lines of major conflicts around the world, including during the U.S “shock and awe’’ bombing of Baghdad in 2003, died Wednesday at her home in Norfolk, Conn. She was 71.

Her brother, John Garrels, said the cause was lung cancer.

Ms. Garrels, a Massachusetts native, started her career in television at ABC News. But it was at NPR, where she worked for more than two decades, that she made her name covering strife and bloodshed across the world. She became known for conveying how momentous events, including wars, affected the people who lived through them. Her backdrops included the Soviet Union, Tiananmen Square, Bosnia, Chechnya, the Middle East, Iraq, and Afghanistan.

“Garrels’ reporting is full of history, context, analysis and humor, combined with the skillful use of natural sound.’’ So read the citation when she won an Alfred I. duPont-Columbia University Award for her coverage of the Soviet Union in 1997, although it could have applied to her body of work over the years.

Her elegant personal style and intellectual air masked a zeal for taking risks. She covered both Chechen wars despite a Russian ban on outside journalists. After the terrorist attacks of Sept. 11, 2001, she traveled to Afghanistan to report from the front lines of the anti-Taliban Northern Alliance. During that trip, when journalists in a convoy were ambushed and killed, Ms. Garrels decided she would be safer traveling alone and embarked by herself on a two-day bus ride to Kabul.

Along the way, she collected the stories of the people around her for reports on the war’s human toll, writing dispatches by candlelight and sending them by satellite phone.

“She was relentless, just relentless,’’ Deborah Amos, an NPR correspondent who worked with Ms. Garrels overseas, said in a phone interview last year for this obituary. “She took every risk you could take.’’

She was also irrepressible. When the war in Ukraine began in February, Ms. Garrels, long retired from NPR and in treatment for cancer, proposed covering the conflict.

The network declined to send her, so instead she helped found a nonprofit relief organization, assist-ukraine.org, which raised money to send supplies to Ukrainians.

Unlike some correspondents, who parachute into hot spots and move on, Ms. Garrels often returned to the scenes of her earlier reporting and dug in. To monitor the breakup of the Soviet Union, for example, she followed residents of a single city in west-central Russia for 20 years.

Her most acclaimed reporting came during the 2003 Iraq War. More than 500 journalists, including more than 100 Americans, covered the run-up to the war. But once the United States began the all-out bombing campaign she was one of 16 US correspondents not embedded with US troops who stayed — and for a time was the only US network reporter to continue broadcasting from the heart of Baghdad.

With her vivid reports often picked up by other broadcasters, Ms. Garrels — and her safety — became a story in itself.

Once she was home, other reporters interviewed her about her ordeal. She told of subsisting on Kit Kat chocolate bars and Marlboro Lights, bathing by gathering water in huge trash cans, and powering her equipment by attaching jumper cables to a car battery, which she lugged up to her hotel room every night.

Ms. Garrels told Terry Gross, host of the NPR program “Fresh Air,’’ that she had not thought twice about staying in Baghdad. “My gut instinct told me I would be OK,’’ she said, in part because she worked with a very competent fixer.

She admitted to Gross that she had been worried at times about being taken hostage, but she said she was usually so exhausted at night that she “slept like a baby through the bombing.’’

What really scared her, she said, was the thought of not telling a story as well as she wanted to. “I don’t write easily,’’ she said. “It’s a painful process.’’

Years later, Ms. Garrels said in an interview that while in Baghdad she had experienced a crucial reckoning. When the US Marines and some Iraqis toppled a massive statue of Saddam Hussein, the country’s dictator, she quoted somber Iraqis saying that the arrival of US troops had been humiliating and predicting that the Americans would soon be resented. By contrast, she said, the dominant images on television were of jubilant crowds cheering the fall of the statue.

Ms. Garrels’s editors in Washington were watching television and asked her if she wanted to revise her story, given the discordance between her words and the televised images. No, she told them, insisting that her interviews more accurately reflected the moment.

Her version was borne out by other photojournalists on the ground and by an after-action report by the Army, which said that the Marines had more or less stage-managed the toppling of the statue with a small number of Iraqis in an otherwise empty square.

“That was probably one of the most important moments for me as a reporter,’’ she said, as it reinforced her instincts to trust her own reporting.

Her ability to find the deeper reality became a hallmark of her reporting.

In 2003 she received the George Polk Award “for enduring bombings, blackouts, thirst and intimidation to report from the besieged Iraqi capital of Baghdad.’’ The next year she was part of the NPR team that won the duPont-Columbia Award and a Peabody Award for its Iraq coverage.

Anne Longworth Garrels was born July 2, 1951, in Springfield. Her father, John C. Garrels Jr., was an executive and later chair and managing director of Monsanto. Her mother, Valerie (Smith) Garrels, was a homemaker.

When Anne was about 8, the family moved to London for her father’s work. When she returned to the states, she enrolled at Middlebury College in Vermont in 1968.

“She was originally going to be a doctor,’’ Laura Palmer, who met Ms. Garrels when they both worked at ABC News in the mid-1970s, said by e-mail. “A chemistry professor at Middlebury told her she should learn Russian. She was never sure why. But she transferred to Harvard and fell in love with Russian and everything about the country.’’

Ms. Garrels graduated in 1972 with a degree in Russian. In 1975 she landed a job as a researcher at ABC News; because she knew Russian, she was sent to Moscow. ABC soon promoted her to Moscow bureau chief. Her tough reporting on such topics as housing shortages, loneliness, and suicide led authorities to expel her in 1982.

After Russia, ABC sent her to cover the conflicts in El Salvador and Nicaragua. NBC then hired her in 1985 as its State Department correspondent in Washington.

In Washington, she met James Vinton Lawrence, whom she married in 1986. Lawrence, who had worked for the CIA in the 1960s, became a renowned caricaturist, chiefly for The New Republic.

Ms. Garrels joined NPR in 1988 and worked in its Moscow bureau. When she left Moscow in 1998, she and Lawrence sold their home in Washington and moved to his family’s compound in northwest Connecticut.

Ms. Garrels’s first book, “Naked in Baghdad,’’ was published in 2003. The title referred to her habit of working in her room at the Palestine Hotel with no clothes on. Her explanation was that if Iraqi security forces banged on her door, they would give her time to get dressed, and she would be able to hide her illegal satellite phone.

Ms. Garrels retired from NPR in 2010, although she remained a contributor. Her continuing reports from Chelyabinsk, a military-industrial city in Russia, provided the basis for her second book, “Putin Country: A Journey Into the Real Russia.’’ It was published in 2016 — the same year that she underwent her first treatments for lung cancer and the year her husband died of leukemia.

In addition to her brother, she leaves a sister, Molly Brendel, and her stepdaughters, Rebecca Lawrence and Gabrielle Strand.

Lawrence used to say that Ms. Garrels had two speeds: When she came home from overseas, she would flip an inner switch and go from battle mode to rest. In her down time, he said, she was often quite muddled, unable to navigate her way into town or work her computer.

But when she was ready to go off again, Lawrence said, she slipped back into battle mode. “All that ineptitude drops away,’’ he said, “and Annie becomes an enormously competent steel-backed reporter.’’