Do you know Staff Sgt. Fitts? 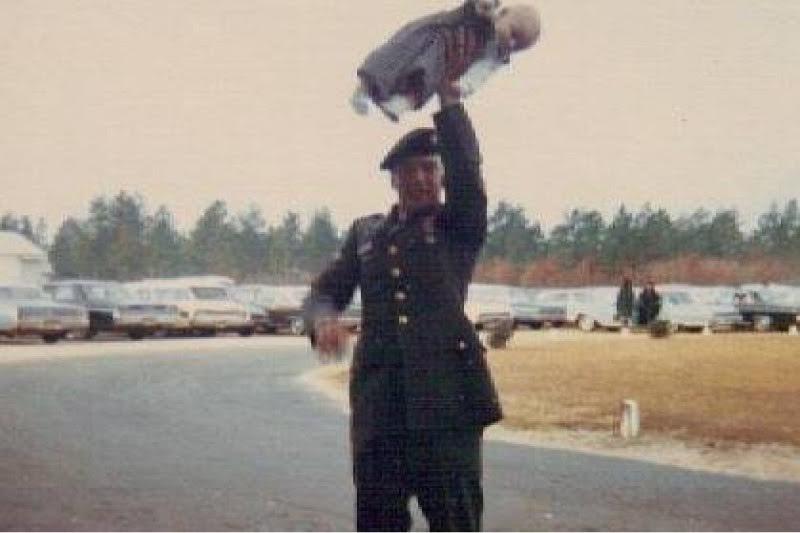 On Richard Fitts Jr.’s Facebook page is this blurry picture of his father in uniform lifting, with one hand high above his head, the baby Fitts Jr.

NEXT IMAGE
By Beverly Beckham

He doesn’t have the skills or the money. He’s not a private eye or a millionaire. So it’s Herculean, what he’s trying to do.

But it’s a human need to want to know how your father lived and died. So Richard A. Fitts Jr. is on a mission to talk to men who knew his father, who trained with him, bunked with him, fought with him, who knew someone who knew him. Big things. Little things. Anything.

The most beautiful quilts are made of such scraps.

Fitts Jr. is 50 now, but was just 2 when his father, Green Beret Staff Sergeant Richard A. Fitts, then 22, was reported missing in action in Vietnam. Fitts Jr. does not remember his father. But he remembers knowing, even as a little kid, that his father had volunteered to be in the special forces. He remembers, too, the POW/MIA flag that flew at his grandparents’ home in Abington, watching the news with his mother every night afraid that he would hear his father’s name listed among the dead, and the nonstop effort his family made to learn exactly what had happened to the young soldier his father was, an outgoing boy everyone talked about and missed and loved.

Ordinary, working-class people, Staff Sergeant Fitts’s parents, Walter and Rosella, went through all the correct channels to find out what had happened to their son. They wrote letters to the military and to politicians. They talked to the press. They kept Richard’s name in the news.

For years and years they persevered.

And for years and years the military kept mum about the secret mission Fitts was on when he went missing.

“It was so secret,’’ his son said, “that even regular secret forces didn’t know it existed. The men had no dog tags. No American clothes. Nothing that could identify them or be traced back to the unit.’’ The Fittses were told only that their son, along with six others, was aboard a helicopter that was shot down on Nov. 30, 1968, over Laos.

Because Fitts was classified as “missing in action’’ for seven years, the family lived with hope. I remember those days, sitting with Walter and Rosella at their kitchen table, taking notes for a story for the Patriot Ledger. They were full of fight then, sure that in time their son would be found. And he would come home.

In 1975, the military changed Fitts’s classification from “missing in action’’ to “presumed dead.’’ The Fittses still hoped. It wasn’t until March 1989, when the wreckage of Fitts’s doomed flight was recovered and human remains found and positively identified as Staff Sergeant Richard A. Fitts, that they stopped hoping.

On Richard Fitts Jr.’s Facebook page, there’s a blurry picture of his father in uniform lifting, with one hand high above his head, the baby that Fitts Jr. then was. It’s a picture of a young and strong and confident man.

The son is now making a documentary of this father he didn’t know and is getting to know him along the way. Friend and fellow musician Rudy Childs, a documentary maker, is shooting the film. “We’ve been at it for almost a year,’’ Childs told me last week. Both have full-time jobs and limited resources, but they are undaunted by this.

They’ve digitalized old VHS footage of news broadcasts that aired intermittently all the years Fitts was missing. They’ve interviewed local people who knew Fitts as a boy and as a young man. In October, they flew to Las Vegas for the Special Operations Association Reunion and filmed men who had served with Staff Sergeant Fitts. And on tap is a trip to South Dakota to interview a special operations soldier who ran missions with Fitts. “He is one of the only living people who knew my father on a day-to-day basis.’’ said Fitts Jr.

Before he was in the military, Richard Fitts knew all about cars and scuba diving and archery and guns. He knew martial arts. He played the guitar and drums. “Learning this was like finding the Holy Grail,’’ said his son, who is a musician, too.

Eighteen when he married, 20 when he became a father, 22 when he volunteered for special operations, and 22 when he died, Staff Sergeant Richard A Fitts lived a full life in a short time.

“I want people to understand what type of apple pie American kid my father was and how he is a part of what makes this country free,’’ said his son. “And I want other sons and daughters who may be in my position right now to feel the pride and respect I feel.’’

Richard Fitts has a gofundme page. To learn more, go to www.gofundme.com.

Beverly Beckham’s column appears every two weeks. She can be reached at bevbeckham@gmail.com.